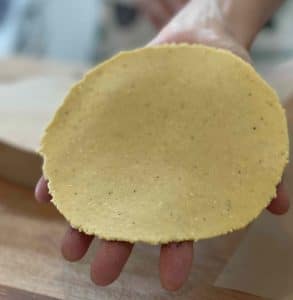 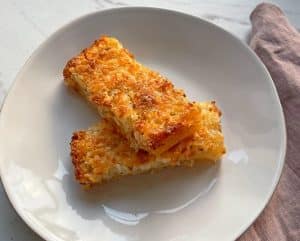 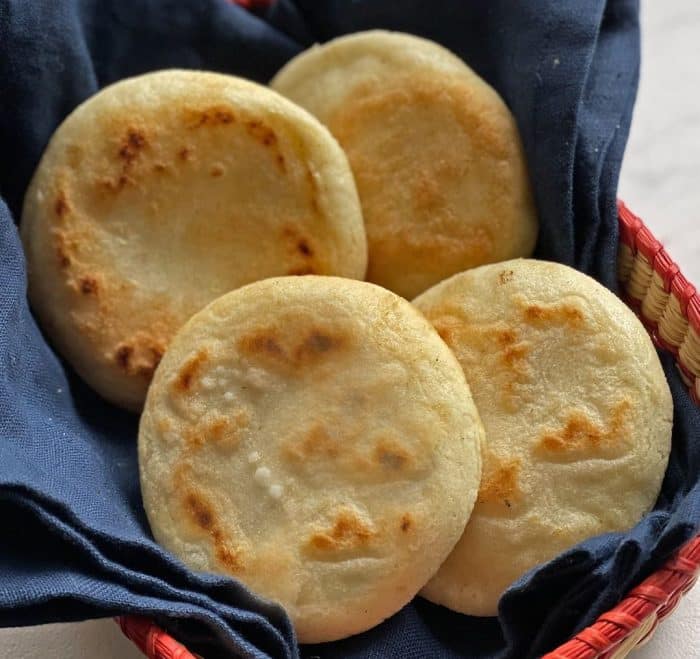 Arepas, pupusas and empanadas are the daily bread reached for every day by millions of Latinos. Never had one? All three are something like their cousin, the tortilla, but thicker, crispier and often stuffed. Yum.

A toasty stuffed arepa, a hot pupusa super rellenita, or a golden and crujiente empanada—mmm. Personally, I crave all three. I mean, can you blame me?

Neighboring Latin American countries that once shared a common land thousands of years ago still use similar, if not the exact same ingredients and measurements to prepare, cook and fill these delights made with harina de maíz o trigo—corn or wheat flour.

Though Spanish conquests and wars created borderlines, states, and countries, recipes native to South America remained in the hearts and minds of indigenous people. As they wandered the land and sea, their cooking traditions continued to migrate and evolve.

Each nation’s locals put their own twists on the foods we now call arepas, pupusas and empanadas. Their resulting dishes are so similar, Colombia and Venezuela both claim arepas as their own, and Colombia and Argentina do the same with empanadas.

But no one even tries to compete with El Salvador for pupusas. Each year, the country celebrates National Pupusa Day the second Sunday of November in a major way. If you’re not cooking them, you’re definitely eating them that day, so yeah, it’s kind of a big national deal!

It makes sense, then, that arepas, pupusas and empanadas sometimes get confused for each other. Yes, they’re actually more alike than not—but their differences are muy significante.

If you love arepas, pupusas and empanadas as much as we do at Familia Kitchen, then you also believe that each pansito deserves its own special moment in the spotlight! Let’s get into the similarities and differences of our favorite masa snacks.

Arepas are enjoyed daily for breakfast, lunch and/or dinner across Venezuela, Colombia and other northern South American countries that once belonged to the same territory during pre-Columbian times and were part of one large Spanish state called Gran Colombia, until it dissolved in 1831.

Three ingredients go into these delish patties: pre-cooked cornmeal or masa harina, warm water and salt. The trio are slowly combined and kneaded until the mixtura becomes a soft and moist dough. Some people allow the dough to sit for a few minutes while they prepare the relleno of their choice. When ready, you break off a medium-sized chunk of dough, roughly the size of your palm, and form it into a perfect ball. Gently pat and cup it between your palms for about 10 seconds, until it forms into a disc as thick as a finger.

The arepas are then briefly placed over a hot griddle or comal, until both sides turn golden brown. They are then often popped in the oven for a few last minutes so that the arepas continue to expand and crisp. If you want to stuff your arepas, slice a knife along one edge until a large-enough pocket is created. Its opening eagerly awaits a generous filling of savory meats, veggies, beans, cheese y más.

One of our favorite arepa fillings is reina pepiada—a classic with Venezolanos. It got its unique name in the 1950s after the first Venezuelan woman won the Miss World contest. Her name was Susana Dujim. Her father had promised a local Caracas arepa shop called Los Hermanos Álvarez that his daughter would visit. That much-awaited day, they handed the beauty queen a newly created arepa in her honor. It was stuffed with a creamy shredded chicken salad made with mayonnaise, cebollita picada, and avocado slices (is anyone else getting hungry?). The reina pepiada remains a best-seller across the country to this day.

Other popular Venezuelan arepas with fun names include the arepa pelúa, which is stuffed with carne mechada (shredded beef). It’s said to resemble messy hair—hence its name: “pelúa”—hairy. The arepa domino is surely named after the way its beans and cheese filling resembles the black and white game pieces. It’s also delicious. And then there is the bright-yellow arepa perico, which means parrot, made with egg and tomato.

In Colombia, arepa recipes tend to use the puffy arepa as a base and the filling as a topping. Colombian arepas are usually sweeter and stuffed with cheese or simpler ingredients than their Venezuelan cousins.

It’s true, Google it. La pupusa is El Salvador’s national sandwich, celebrated annually on National Pupusa Day, the second Sunday of every November. And did you know that the world’s largest pupusa measured 14 feet 9 inches in diameter? It was made in Olocuilta, El Salvador in 2015 and holds the Guinness World Record.

Records indicate that the honor of inventing pupusas go 2,000 years back to a Pipil tribe who inhabited the Mesoamerican region we now know as El Salvador. As populations expanded, and people migrated, pupusas popped up in other territories, including nearby Honduras.

Pupusas are similar to arepas but the process differs after the bolita de masa is flattened. When making pupusas, the disc is thinner and is slightly cupped to create a small nest to hold the filling. The dough is then pulled over the filling and sealed tightly on the other edge. It looks like a fluffier, thicker tortilla.

Like arepas, pupusas have many delicious rellenos. The most common are beans and cheese, chicharrón (pork rinds), shrimp, and loroco, a native flower to El Salvador, just to name a few.

Let’s talk curtido and salsita. A good Salvadorean pupusa is just not complete without a final topping of un curtido delicioso—a slaw-like, slightly fermented mix of shredded cabbage, carrots, chopped onion, water, vinegar, and oregano. Think kimchi lite. A cruncy, juicy curtido is absolutely essential when taking the first bite of any pupusa. So is a spoonful or two of the nation’s beloved salsita de tomate: made with tomatoes, garlic, onion and a chile, either serrano or jalapeño.

Empanadas are not only crunchy, filling and sabrosas, they are extremely versatile. Nations around the world have their own takes on this “enbreaded” creation. Countries and territories in south and west Asia, Europe, and Latin American destinations such as Argentina, Colombia, Puerto Rico, Chile, Uruguay, Panama, Brazil, y muchos más each have their own version of the empanada.

In Latin America, they are mostly called empanadas. In other parts of the planet they go by: pastelitos, pastelillo, samosas, panzerotti, sambousek, and of course meat pies, to name a few.

Empanadas around the world are stuffed with just about anything you can think of. Rellenos range from vegetarian to meat and chicken, seafood, various cheeses, and many, many more. Popular Latin American empanada stuffings include: ham and cheese, beef and papitas, and different guisados that often include (or don’t, depending on the region) olives, raisins, and peppers. They are usually accompanied with a fresh dipping sauce such as ají, a favorite Colombian salsa made with lime, tomato, cilantro, salt and pepper.

La preparación for empanadas closely resembles the process of making arepas and pupusas. The dough is combined with water and kneaded until a nice and soft consistency is achieved. It is then covered and la masita rests for about an hour while the filling is prepared.

When ready, the dough is flattened using a roller or baking pin. Circle cutouts are made using a soup bowl, pan lid or anything handy that makes a perfectly round shape. Your choice of filling is then placed on one side of the masa disc and covered with the other half of the dough. Here’s the pretty part: the edges are sealed using water or a beaten egg and reinforced by pressing the excess dough with your fingers. Or the tines of a fork, if you’re from Panama. Depending on the person making the empanada, the extra dough after it is sealed can be either cut off or folded back over again, creating a thick crust that resembles a twist or braid.

Empanadas are enjoyed as a snack or side, a meal, and even dessert! It’s all comes down to the dough—and by dough I mean you can make the shell or “bread” of the empanada sweet (like these guava and queso empanadas) or salty (like these beef, red pepper and olive empanadas) using just about anything that can be mashed and kneaded. This includes not just wheat or corn flour/meal, but yuca, mashed plantain, potatoes, carrots, beets, y muchos ingredientes más.

Say I Dough to All 3

We might think of these three toasty treats as cousins, the beloved products of sister nations. In fact, many other countries beyond those in Latin America claim to be their originating homelands.

The truth is: They are all correct!

We were once all the same people eating the same thing: corn, in all of its configurations—including arepa, empanada, pupusa, plus, of course: tortilla—and many more. No matter the final shape or filling, the concept of flour (usually corn) plus water that is then cooked and stuffed or eaten plain all lead back to the earliest days of humans and food. Lucky for us, our ancestors got it deliciously right.

Emilly Olivares and her wife Karen met when they were both Marines. They have since both completed and moved on from military service and purchased their first home in the northwest suburbs of Chicago. ”We are full-time students, dog moms and, most importantly, foodies!” They love to cook (and eat!) dishes reflecting Emilly's Mexican and Karen's Ecuadorian family heritage.
TAGS: corn, corn flour, flour, big groups, brunch, date night, dessert, Father's Day, lunch, national feast, side, snack, Argentina, Colombia, El Salvador, Guatemala, Honduras, Panama, Venezuela, arepas, pupusas
Share