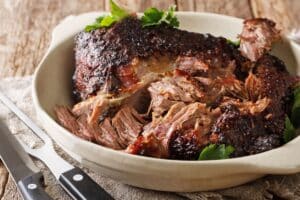 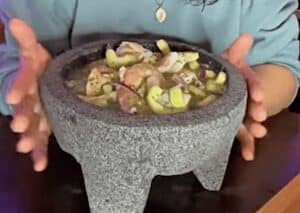 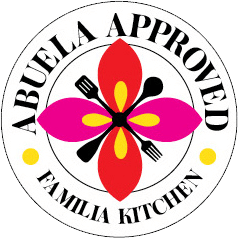 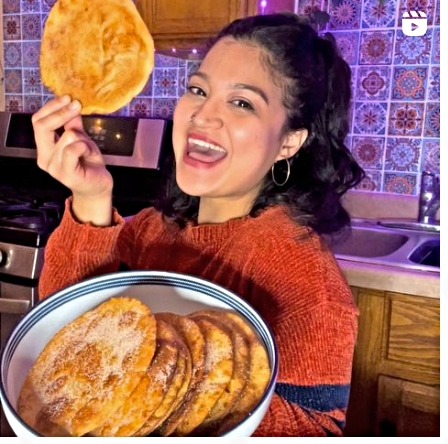 Buñuelos are the star sweet treat in this delicioso new episode of Vanessa ”Vivi” Vianey’s latest Vivis_Table Instagram Live cooking series, “Feeding the Soul.” ”Really what buñuelos are is fried dough, seasoned with cinnamon and sugar,” says Vivi. ”You make the fried dough with flour, eggs, water. But the shortcut to get to it is you just buy flour tortillas. You get the same result!”

Easy, sweet and delicioso? Plus: fast? Count us in. We tuned in to Vivi’s weekly Live cooking class last Thursday to see how she makes them, step by step. ”My abuela taught me how to make these quick and easy buñuelos,” she explains, as she fries flour tortilla after tortilla in a large pan filled with hot oil, all the while answering viewer questions and comments. ”They taste something like a light churro.”

The best part of making her abuela’s buñuelos recipe, Vivi explains, is how simple they are to prep. This recipe is a shortcut version of the traditional Mexican cinnamon-sugary dessert. You save on time, but not a smidge of sabor, she assures us.

Although she is now a chef working at Chicago’s Bavette’s Steakhouse and Bar, Vivi loves to share tips for simple homecooking on her Instagram Lives, walking her viewers through favorite Mexican dishes. She started out as a street vendor selling Michoacan-style tamales and remains deeply connected to her Mexican comida heritage. Vivi’s love of food is inspired by her Mexican grandmother, she says, who taught her how to cook. “I’m on a mission to keep my abuela’s recipes going. Sharing food with people makes my heart full.”

With our shared love of abuela cooking and belief in the power of family and food traditions to remind us who we are and where we come from, Familia Kitchen is honored to partner with Vivis_Table and showcase her weekly “Feeding the Soul” Lives recipe cook–a–longs.

What make these buñuelos so special? They taste amazing, yes, but their magic is how quickly they come together, she says. ”We all want to do things super-fast, super-efficient, and that’s how my grandmother showed me to make them. I think she did it this way because she had such a big family. She had nine kids! And then her kids had large families, at least four kids each. So, this is how she made enough to feed everyone.”

As she prepares to fry each tortilla in the preheated oil, she coaches us: ”We have to move fast. Submerge it in the oil for about 15 seconds. Flip it. Constantly flip it. Make sure it’s all submerged under the oil or it is not going to cook evenly.”

Vivi peers into the pan as the tortilla expands and bubbles. ”It’s going to blow up,” nods Vivi, approvingly. Use your tongs to ”poke a hole in it to let the air out of the bubbles. Flip it over, poke a hole in the bubbles on the other side, and flatten it out, making sure to keep the tortilla submerged in the oil.” Finally, as each tortilla turns evenly golden brown, use your tongs to remove it from the oil and lay it on a paper-towel lined plate or sheet tray with a wire rack.

Now comes the fun part, says Vivi. Sprinkle the sugar and cinnamon—all over it. She confesses she likes to use a heavy hand. ”I really layer it up. I like to load up each tortilla with a lot of cinnamon and sugar. Because it is so good.”

Vivi tells her Live viewers she chose buñuelos for this December cooking episode because the dessert reminds her of childhood holidays. ”They take me back to Christmas-time. These were always around when we were growing up.”

Vivi smiles at the memory. ”Please try these at home!”

Vanessa ”Vivi” Vianey loves to make the traditional Mexican traditional recipes of her abuela and community. She grew up in Chicago’s Little Village, where in 2021, during COVID, she started selling cafe de olla and Michoacan-style uchepos and corundas in front of her abuelita’s house. Vivi was in the first graduating class of Food He.ro Latino-led culinary school, also located in Little Village. Catch her weekly Instagram Live cook-a-longs at Vivis_Table, where she makes traditional Mexican recipes. ”Food is my love language and sharing food with people makes my heart full.”
TAGS: flour tortilla, Christmas, coffee and ..., dessert, snack, Mexico, bunuelo, buñuelos
Share