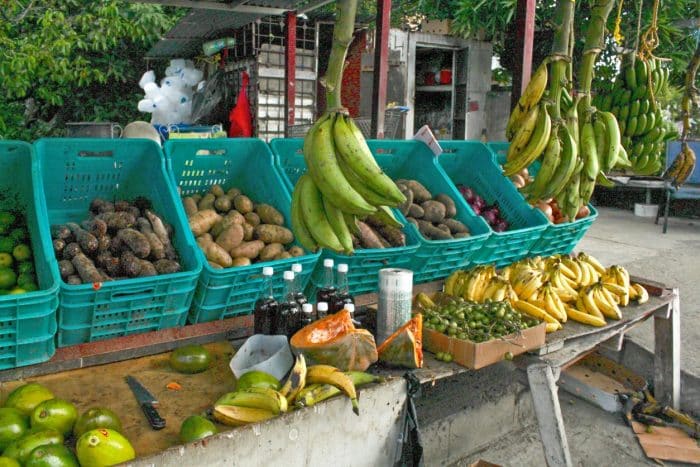 The history of Puerto Rican food goes deep. In his book Eating Puerto Rico, food historian (aka The Foodstorian) Cruz Miguel Ortíz Cuadra explores how food and cooking are tied to Puerto Rican national identity, posing the questions: “What is it that underlies Puerto Ricans’ identification with certain kinds of food? What is the path over time of those foodstuffs that are still recognized as definitive of Puerto Rican cooking?”

Author Von Diaz similarly explores her own identity as a member of the Puerto Rican diaspora in her cookbook, Coconuts and Collards. Born in Puerto Rico and raised in Georgia, Diaz writes, “Puerto Rican food is my lifeline to the island and the way I stay connected that is fundamental to who I am.” She cites the recipes in the classic cookbook Cocina Criolla as especially indicative of influences that combine to make Puerto Rican cuisine. “Its recipes are a fusion of 1950s American ingredients (think mayonnaise and canned veggies) with African deep-frying techniques, indigenous Taíno root vegetables and a Spanish obsession with olive oil, garlic and pork.”

I asked both authors about how food tells the story of Puerto Rican history, and identity, through six common foods of island cuisine. Their following insights may cause you to never look at mofongo or a plate of lechón the same way again.

From tostones to piñon to pastelón, plantains are ubiquitous in Puerto Rico. “They are iconic,” says Diaz. “And they are a way in which our African heritage shows up on the plate every single day.” Plantains and their cousins, bananas, came to Puerto Rico from Africa in the 16th century, via the Balearic islands. “When Africans arrived in the Caribbean as slaves, plantains became an important food in Puerto Rico,” Ortíz Cuadra points out.

Their contribution doesn’t end with the fruit, however. Using the leaves to wrap and cook foods (such as pasteles or guanimes) is a technique that replaced the Taíno method of wrapping and cooking in corn leaves. The cooking methods of mashing, grating and deep-frying, used in dishes such as arañitas and mofongo, also hailed from Africa as did the word mofongo, which Ortíz Cuadra says originated in the Kingdom of Kongo.

Spanish colonization brought a love of meats, especially pork, to the island. It also became emblematic of both abundance and scarcity. Lechón, frequently referred to as Puerto Rico’s national dish, for example, is the hallmark of feasts and celebrations.

But while pigs were easy to raise and initially accessible, Ortíz Cuadra explains that by the end of the 18th century, access to fresh meat “steadily receded for three broad segments of the population: settlers living far away from towns and cities, the urban poor, and those—such as plantation slaves—who were forced to live on a regulated diet.”

The U.S. introduced the island to preserved meats, such as Spam, corned beef and Vienna sausages. “These are foods that will withstand a storm, are easy to prepare and transport,” says Diaz. “But it is also indicative of the States importing these foods to ostensibly take care of the colony and its people, but without a real interest in nutrition.”

Viandas—tubers such as ñame, yautía and yucca—are indigenous to Puerto Rico, just like the Taíno people. The Taíno culture, which dates back to at least 1,000 AD in Puerto Rico, was especially known for making casabe, the starchy flatbread made from yucca flour.

Viandas are perhaps most conspicuously served today in sopa de viandas, representing how the Taíno influence continues to be “very strong on the plate today,” says Ortíz Cuadra.

The Puerto Rican Food History of RICE AND BEANS

It’s a rare meal in Puerto Rico that doesn’t come with a side of this classic combo—whether stewed together (as in mamposteao) or served a caballo (beans on top of white rice). Beans were a pre-Hispanic crop that the “Taíno planted systematically,” says Ortíz Cuadra. He also mentions the way rice is cooked “upwards in a pot” as opposed to horizontally (as in paella) as a “defining African influence.”

Traditionally, sofrito and recaíto, important hallmarks of flavoring introduced during the Spanish Colonial era, provide the base of stewed beans. This base “creates what I think is a uniquely Puerto Rican flavor,” says Diaz. “It’s really easy to identify, both in your mouth and on the nose.”

Salted codfish is closely tied to the island’s slave, military and religious history, according to Ortíz Cuadra. Because salt-curing allowed longevity for the fish, it could be served in small portions but still provide a lot of nutritional value.” The Spaniards fed it to soldiers and slaves to sustain a long working day. Bacalao was also a staple eaten by Spaniards on Christian holy days.

One glorious constant of Puerto Rican cuisine: tropical fruits such as pineapple, mamey, quenepa, guava and papaya. Not only do they grow wild on the island, islanders have been enjoying them since Taíno times. They are, as Ortíz Cuadra says, “prevalent in our contemporary culinary culture,” whether flavoring flan or simply plucked from a tree and eaten on-the-spot.

Coconuts, on the other hand, made their way to the Caribbean via Africa from Asia, and Puerto Ricans today use them to flavor everything from soups, sauces, desserts and the island’s signature cocktail, the piña colada.