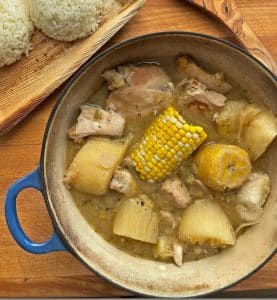 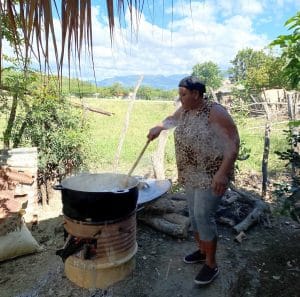 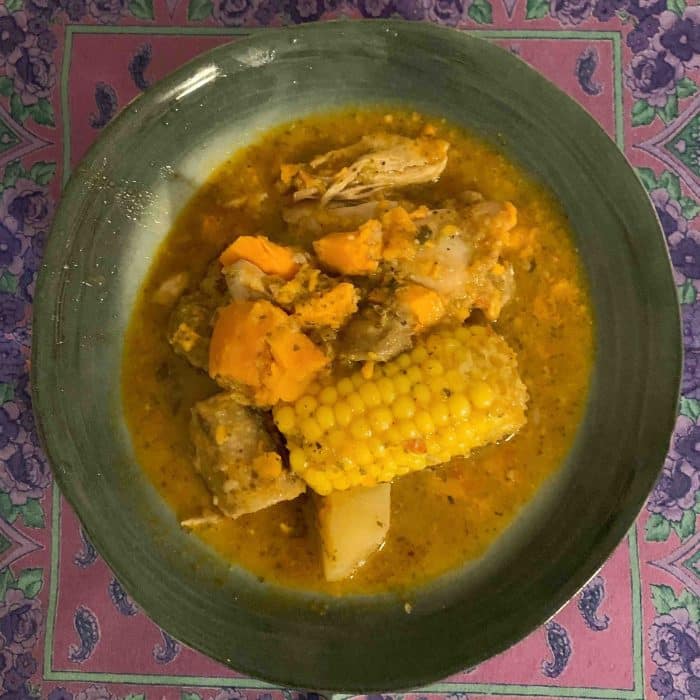 I grew up feeling very disconnected from my Dominican roots in many ways, but the thing that really helped me reconnect was the food.

As an adult, making sancocho has served as a way for me to connect with my Dominicanidad and preserve the memories of my childhood. It’s also been a beautiful way for me to honor my ancestors, who likely made sancocho from the very little they had.

Sancocho is the dish that when I was a kid felt like it took all day to make—and in some ways, it still feels that way. We usually had it during the winter or on rainy gloomy weekends. As I got older it was cure-all—for colds, the flu, and the occasional broken heart.

It’s important to note that when I made this sancocho I didn’t measure anything. You might end up not using all the root vegetables if you don’t have room in the pot. Also, important to note that most of my cooking is done by “eyeballing” ingredients, and feeling the little spark” inside that tells me I’ve added just enough of something!

Everyone has their own way of enjoying a sancocho. I love adding white rice in my sancocho, squeezing some lime, a dash of hot sauce, and topping it with avocado. I know folks who refuse to do this and think it’s blasphemous—LOL! Whatever way you enjoy yours, make sure to remember that nothing beats a good sancocho for the soul.

P.S. The leftovers are even better. But just be aware that the root vegetables thicken the broth the longer they sit. However, this is an easy fix: you can thin out with water for your lunch or dinner the next day (and the days after!). Buen provecho!

Ready to get your sancocho on, a la Juvi?

Juviza Rodriguez grew up feeling disconnected from her Dominican roots but the thing that really helped me re-connect was the food. As an adult, making sancocho has served as a way for me to connect with my Dominicanidad and preserve the memories of my childhood. It’s also been a beautiful way for me to honor my ancestors.
Share