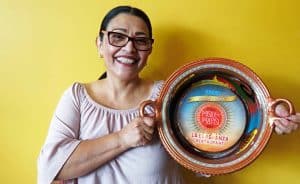 Previous Recipe Meet the Mole Makers of Mole de Mayo—and the 2021 Winner!
Next Recipe How to Make Venezuelan Arepas 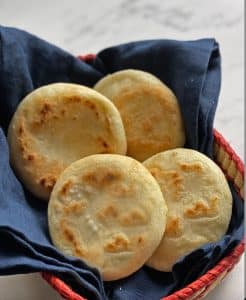 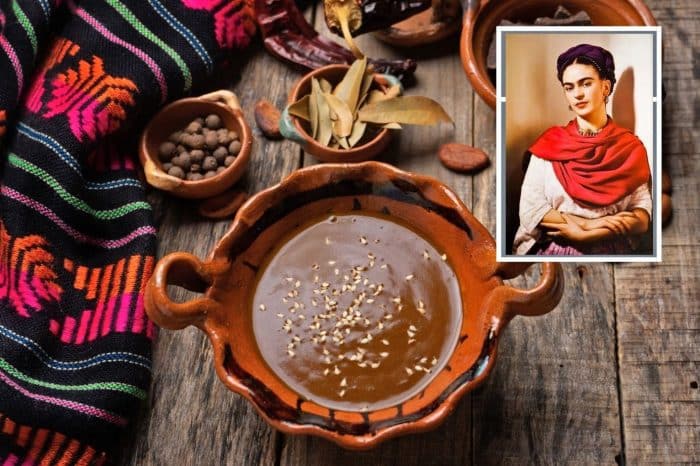 This Frida Friday recipe is red mole with pork and two types of chiles: ancho and guajillo. This dish was a favorite on the table of la talentosa artista Mexicana Frida Kahlo and her muralist-husband Diego Rivera. As lovingly captured by Diego’s daughter, Guadalupe Rivera, in her cookbook, Frida’s Fiestas: Recipes and Reminiscences of Life with Frida Kahlo, written with Marie-Pierre Colle, mole was a favorite dish in La Casa Azul in Coyoacán, Mexico.

This mole was served at a very special Dia de Los Muertos comida Frida hosted in 1942. If you were to stroll into la cocina of La Casa Azul toward the end of October that year, you would find Frida dressing her Oaxaca-style home altar and overseeing the preparation of a dozen dishes for Dia de los Muertos. Combining three of Frida’s passions—art, family and food—this holiday was one of her favorites.

Frida’s love for the feast is seen in many of her paintings, which often show skulls, skeletons, candles and cemazchtil flowers. By November 1, she had carefully put together a radiant, enormous altar filled with fruits, nuts and dozens of sugar skulls spelling out her familia’s names. Pictures of fallecidos were showcased as center pieces. The second day of the feast was devoted to loved ones who have died at an older age, including Frida’s mother Matilda, and here is where we find adult-sized dishes served in place of children’s offerings. A highlight of the meal was this auténtico mole rojo with pork. May we recommend you serve it at your next feast with Frida’s other favorite dishes: like these refried beans, red tamales, and carnitas?