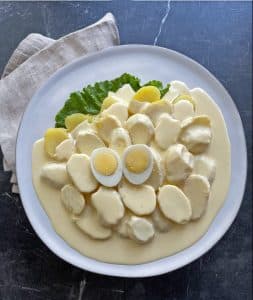 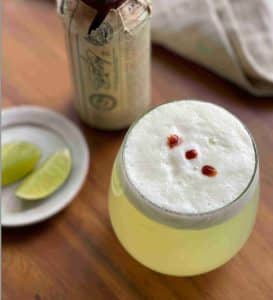 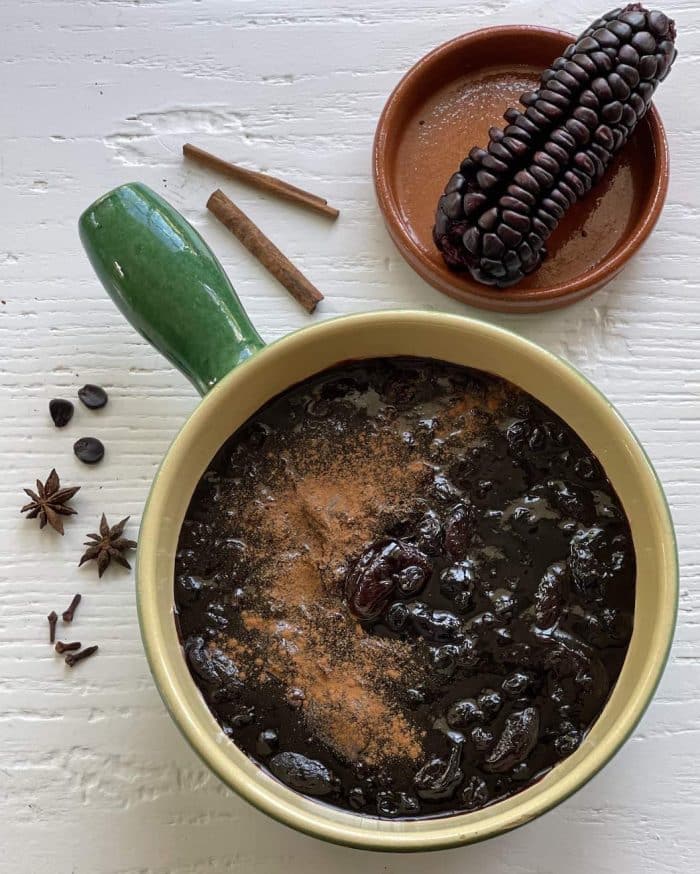 Sweet and earthy, made from dried purple corn and fruit, mazamorra morada is a Peruvian dessert as beloved today as it was by the Incas in pre-Hispanic times. The rich pudding, which tastes something like the inside of black cherry pie, is called “purple jelly” in Ceci Oblitas Reinhofer’s house in Illinois. It’s one of her family’s favorite postres she makes from her native Perú.

Ceci’s husband is the one who coined this dessert purple jelly. He likes his mazamorra served cold, with powdered cinnamon on top. “But then my son likes his hot,” says Ceci, ”and mixed with arroz con leche, all combined, with a little powdered cinnamon on top: half and half.” This mash-up rice pudding and mazamorra is a popular double treat in Peru. It’s called sol y sombra—sun and shade: creamy-white rice (sol or sun) and purple-black mazamorra (sombra or shadow).

It’s also a lot of work: making two desserts each time, she says. “It is laborioso having to do both desserts each time, but I love to cook. I always have. For me nothing is better than go spend a day in the kitchen preparing a domineguero”—which translates to ”a Sundayer,” a feast of special recipes saved for Sundays because there is all the time in the world to cook and for family and friends to come over and linger over the meal you make, with mucho amor, for them.

Ceci, who grew up in Lima, has been making traditional Peruvian dishes like her family’s recipe for mazamorra and papa a la huancaina (check out the one secret ingredient in her recipe that she has never shared publicly before!) for her kids since they were born. She says she wanted her family to grow up in the U.S. knowing the authentic flavors of her native country and resolved early on to spend make them her favorite dishes from when she was their age.

”Mi mama me lo enseño,” she says of this mazamorra morada recipe. Her mother was a great cocinera, and Ceci inherited her love of cooking and recipes. ”My mother never wanted us to go hungry when we left the house so she She was always filling us up with soups and salads, main meals like lomo al saltado and ají de gallina, and then desserts like this mazamorra morado. She believed in three-course meals when we were growing up. This mazamorra morada was made at least one time a month.”

Now Ceci’s kids have learned to love the dessert too. Success.

Even their American friends love it when she first serves it to them, she says. ”People who have never tried it like it. The color catches their attention first. ’Is it Kool-Aid?,’ they ask? “No,” she tells them, ”it’s not Kool-Aid. It’s purple, but it’s not Kool-Aid. And then I have to explain about the purple corn, about morado, about how its dried corn, and so on.”

Purple corn can be found in the Andean zones of Perú, Bolivia, Ecuador and Colombia, where it is called maíz morado. Its kernels are less sweet than the corn we are used to, and bigger: each kernel is about half an inch long. Purple corn is also more starchy than yellow corn, which is why it’s useful to let its cobs soak before cooking to release some of the starch.

When serving, mazamorra morada can be served with a cafecito or a pisco sour, Perú’s official cocktail made with pisco alcohol and beaten egg whites. ”Como quieras,” says Ceci—however you wish. There is no wrong way to eat mazamorra morada.