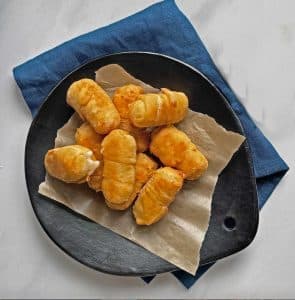 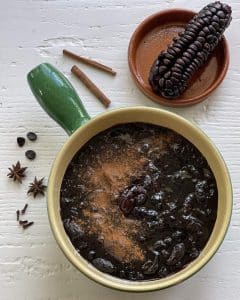 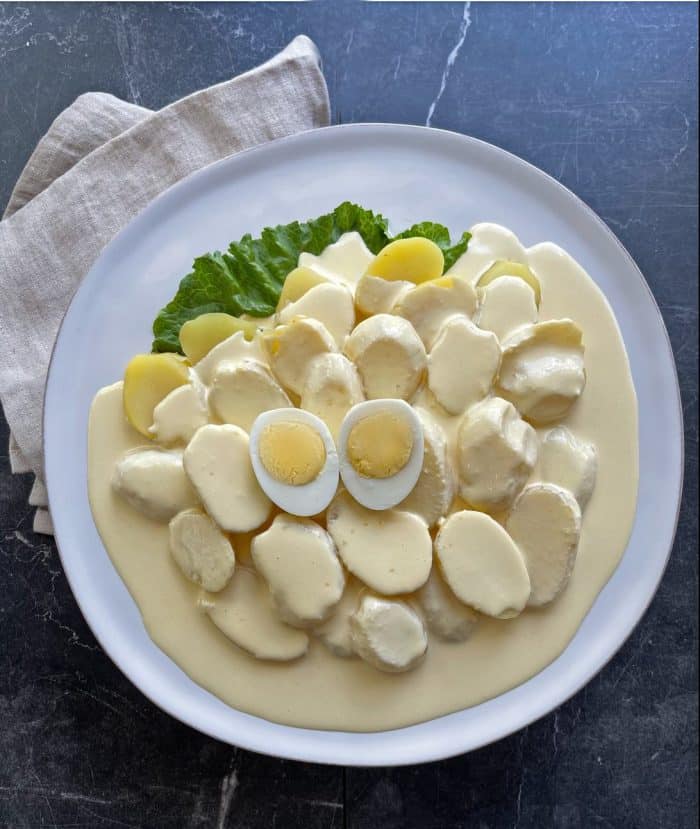 Papa a la Huancaina is both Peruvian comfort food and an elegant dish served at every festive gathering, says Ceci Oblitas Reinhofer, who grew up in Lima and now lives in the Chicago area with her family.

Like so many other Latina moms, she started making favorite dishes from her childhood when she had her own kids. Yes, they would be growing up in the States, but they would also know the taste of her homeland, she determined. This was one of the regular dishes she made for them: cheesy goodness on potatoes, a more exotic mac and cheese.

”I remember as a girl, when I was young, eating this often. When I got married and started raising my kids here, I decided to they would grow up eating my favorite foods from childhood. No McDonalds,” she says, smiling.

Other go-to Peruvian dishes are lomo al saltado—stir-fried beef served with french fries and white rice (carb alert!— as well as what her husband calls ”purple jelly” and Ceci calls mazamorra morrado. This midnight-purple pudding-like dessert with its roots in Peru’s Inca past is made with dried purple corn and cornstarch. It’s often served in a bowl half and half with arroz con leche, rice pudding.

But we are getting ahead of ourselves talking about postres. Let’s get back to the beginning of a classic Peruvian meal and talk appetizers. Next to Peruvian ceviche, papa a la huancaina is the nation’s most iconic starter. This egg and potato dish is served at every family feast and dinner party: ”siempre, siempre, siempre,” says Ceci. Always.

Papa a la Huancaina literally means potato in the style of Huancayo, a capital city in central Perú. Some enterprising home cook in Huancayo came up with a way to make these creamy potatoes drizzled in this bright-yellow milky queso sauce with a hit of heat from Peru’s signature pepper, the ají amarilo.

Except an alternate origin story describes this dish originating in the capital city of Lima, explaining it was made for railroad workers working on the train line to Huancayo. Another holds that they were sold along the train line from Lima to Huancayo by local Huancaina women, who prepared them for hungry passengers.

No one knows precisely how this appetizer and side dish came to be, but there’s no disputing its ongoing popularity and iconic status in her homeland’s cuisine. But lately, Ceci admits, she hasn’t made this dish often because she is eating keto to stay in shape. That means no potatoes, sadly. But every once is a while, on a festive occasion, her family craves them and Ceci is more than happy to head into the kitchen to whip up Peruvian homecooking. She calls these dishes domingueros—Sundayers, the kind of cooking you do only on Sundays when family is coming over and you have all the time in the world to make special dishes and luxuriate over them, everyone together.

“We eat these papas with arroz con pollo. Or when we get together at a parilla and grill meat, in the summer.” Anytime, really, when you are with family and people you love, having fun.

“My mother and I have a secret weapon,” says Ceci. They use one surprising ingredient that makes their version of this dish the best many people have ever had. ”They try it and they tell me: WOW, what did you put in this?”

She never tells them, because they’ll think it’s so odd, plus it’s her own secret recipe. But she is sharing it with Familia Kitchen today, she says. “I think my son knows how to make it, but I never told anyone else, because they would probably say, you put what in your papa? No one does this!”

One day, she was experimenting with her mother’s traditional recipe, and she decided to try adding 1 hardboiled egg to the blender with the dish’s signature cheese and ají amarillo sauce. It surprised her, in a good way. “It made the papa taste so, so good. It also gives the eggs a creamier consistency and texture.”

Ceci’s been making her updated version of the recipe ever since. ”Many people would wrinkle their faces and say: ’You add a hard boiled egg? Why?’ Because it’s not traditional,” she says. ”But it is very rico. Once people try my version and they go back to eating theirs, they always tell me, ’It came out well, but it’s not as good as yours.’”