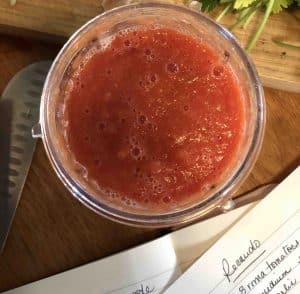 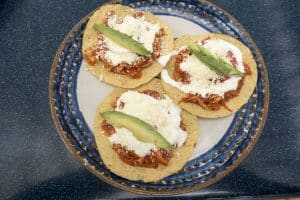 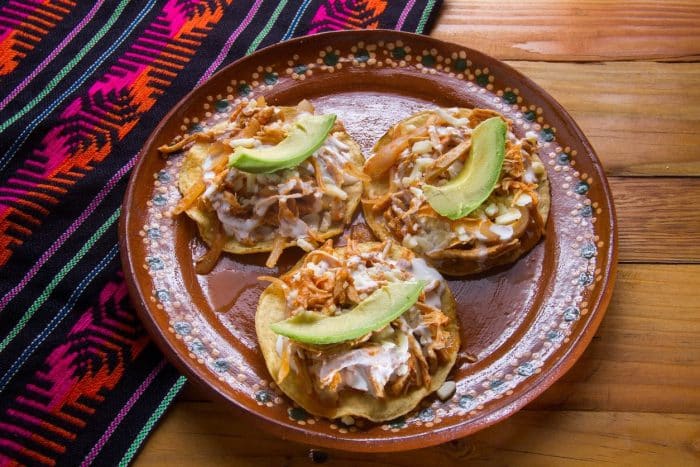 It was Christmas 2017 and I don’t remember who came up with the idea, but it spread through my dad’s side of the family: We were going to have a cooking competition for the best Mexican tostada topping.

For most families, the holidays are a time to reminisce over the past, fawn over grandkids, and enjoy food. Lots and lots of food. And while my family has often feasted on Mexican and American dishes—no one bats an eye at seeing tamales, arroz, and frijoles next to a pot roast, mashed potatoes, and biscuits—a few years back we decided to go all in on our Mexican traditions. Exhibit A: our tostada family cooking competition.

I didn’t recognize the joys of cooking then, so I was not among the competitors. I did contribute tostadas though, and thankfully, we had several buenos cocineros in the family who rose to the challenge.

At my aunt Blanca’s house that day, we were greeted by a spread of delicious dishes for our tostadas. She made lomo or pork tenderloin; her sister, my aunt Marisela, prepared nopalitos; and my mom, Lula, set out a family favorite: her traditional chicken tinga. The table was also set with non-competition sides we all loved, like frijoles and guacamole, to round out the meal.

The competing tostada toppings were each labeled with a number, and we lined up. Diligently, we all helped ourselves to as many tostadas as could fit onto our plates so we could taste—and vote.

A Word on the Beloved Tostada

Our indigenous ancestors created tostadas long before the conquest. Tostadas along with their other maíz-based cousins survived the conquistadores and became part of everyday Mexican eating. They are also a staple across the Mexican diaspora.

Not sure about the difference between a tostada and a taco? Tostadas are fried or toasted and therefore crunchy. They are flat and always corn. Tacos, on the other had, are usually soft, tend to be folded around their filling, and can be either corn or flour. They’re often smaller, too.

In my family, tostadas are the go-to crunchy vessel for a simple bite like picadillo, ceviche or cueritos, or used the way a dinner roll is to accompany a main dish like mole or pozole. My mom often makes ours the old-school way, letting tortillas sit on the comal to toast. And sometimes we simply forget that there’s one more tortilla sitting on the comal and it hardens accidentally. No harm, no foul because what was once a tortilla is now a tostada and is just as useful and enjoyable.

Back to the Cookoff: Tostada Time

Once all the votes were counted, one tostada topping by a newer member of the family, my cuñado Jorge, was the clear winner. Followed closely behind by my mother’s recipe, which came in as a top contender.

Jorge’s winning approach? Abuela cooking. He made his creamy tostada topping on chicken tinga with poblano chiles based on a recipe his mother, Francisca, concocted in her humble kitchen back in Mexico. He told us he brought her homemade sazón to the States and that when he cooks her recipes, it’s almost like having her here with him. That’s significant because Jorge has only been in the U.S. three years or so. My sister met him in Mexico and they married and he immigrated once he received a visa.

Like so many Mexican families, mine represents multiple stages of immigration. My paternal grandfather arrived in the U.S. in the ’40s. He later brought my grandmother and they had four children in the U.S., one of them being my father. My dad met my mom in the same town my grandmother came from in Mexico: San Miguel El Alto in Jalisco, and my mother immigrated to the U.S. after they married in 1979.

And now we have welcomed Jorge—who’s also from San Miguel El Alto—to our family and this country. He follows in the footsteps of so many immigrants who continue to make favorite traditional dishes to stay connected to their homeland and family.

“To share this with my kids, with you and the people around me fills me with gratitude. Es algo de México que no se me va olvidar nunca estando acá,” Jorge told me, when I asked him for his tinga recipe as I was writing this.

Here’s hoping our family can soon get together again in the future to enjoy our favorite dishes, swap stories, and maybe even challenge each other to a traditional comida competition again.

Arianna Hermosillo is a Chicago-based journalist focused on stories and news in Black and Brown communities. She is passionate about advocating for the Latinx community, supporting women and BIPOC in the workplace, and mentoring peers and youth.
Share