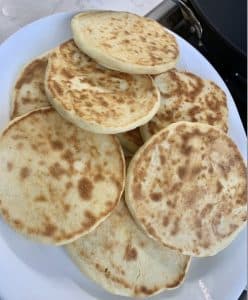 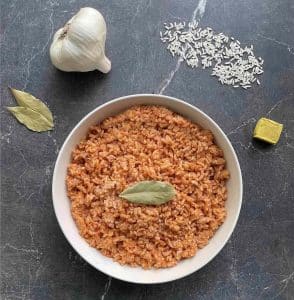 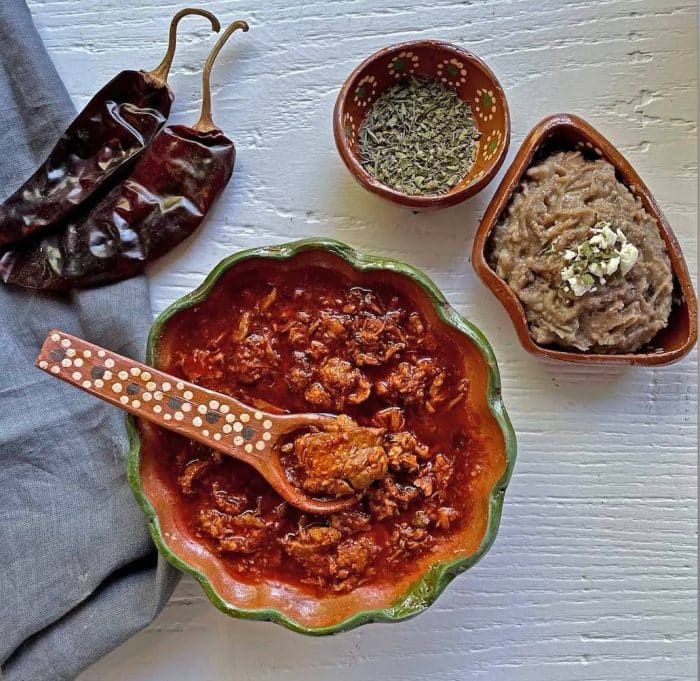 This red chile pork stew is so delicioso and special, it’s called asado de boda—wedding stew. But in the home of Velia García of Illinois, no one waits for a Mexican family wedding to make it. The dish is in regular rotation, says Velia. ”I cook it all the time, about two times a month. My husband especially loves it.”

Red chile stew is traditional in many Mexican cities, including Durango, in the Sierra Madre foothills of northern Mexico. That’s where Velia grew up and where her parents still live on their ranch. “My mother taught me to make this asado,” says Velia. ”I grew up watching her cook it so often when I was a young girl. And then I started making it myself.”

Back then, Velia remembers, this dish was cooked over an open fire. Its defining ingredient is chile guajillo, also called chile guaco in neighboring Guatemala. This deep-red, dried pepper’s flavor is strong but not too spicy. Guajillos score medium-low (2,500 to 5,000) on the Scoville scale, which rates chile heat. ”The cumin and the garlic also give it a great flavor,” says Velia. She buys the pork precut into small chunks, so that each piece is about 1 ½ inches long and has both rib meat and bone in each bite. “It’s so good you want to gnaw on the bone,” she grins.

Serve this asado in a bowl with a spoon and hot tortillas, she says—though many people just pick up the pork and eat it with their hands. If you can’t find the pork pre-sliced at the store, buy the ribs whole. Separate them at home with a sharp knife and cook them the same way, adds Velia. You’ll taste for yourself why this dish is wedding worthy when the meat starts to fall off the bone and soak in the guajillo and cumin salsa.

Why Is It Called Wedding Stew or Asado de Boda?

As with so many dishes, the origin of its name is hard to pin down. Some credit Mexican Revolutionary War hero Pancho Villa. The tale goes that one day he and his men arrived at a town called Ejido de Morelos in Zacatecas after winning a battle. He asked the locals to prepare a pork stew with red chiles in honor of their victory. This asado was pulled together and served to the fighters, cementing its rep as a dish worthy of celebrations. (Didn’t see the part about a wedding, did you? Neither did we. Short answer: No one exactly knows why this dish is called asado de boda.) That said, the chile-rojo stew started showing up at country and small-town weddings, eventually making its way onto the menus of bodas and special gatherings in the big cities. It’s still loved and served at weddings a century later.

Aside from the requisite guajillos and pork, asado de boda recipe ingredients vary across Mexico: from region to region and family to family. Different cuts of pork are used. Some versions call for a mix of red chiles, others include tomatillos or different spices. Velia’s family recipe stands out for its simplicity, short list of ingredients, and addictively authentic sabor.

Velia typically serves this stew with a side of Mexican rice, refried beans, and homemade corn tortillas. Consider making asado de boda for your next special gathering, says Velia. Your familia might even start begging you to make it once or twice a month—just like hers.