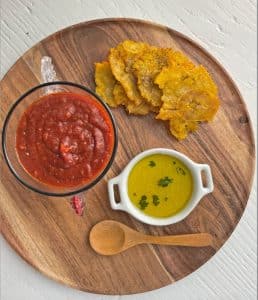 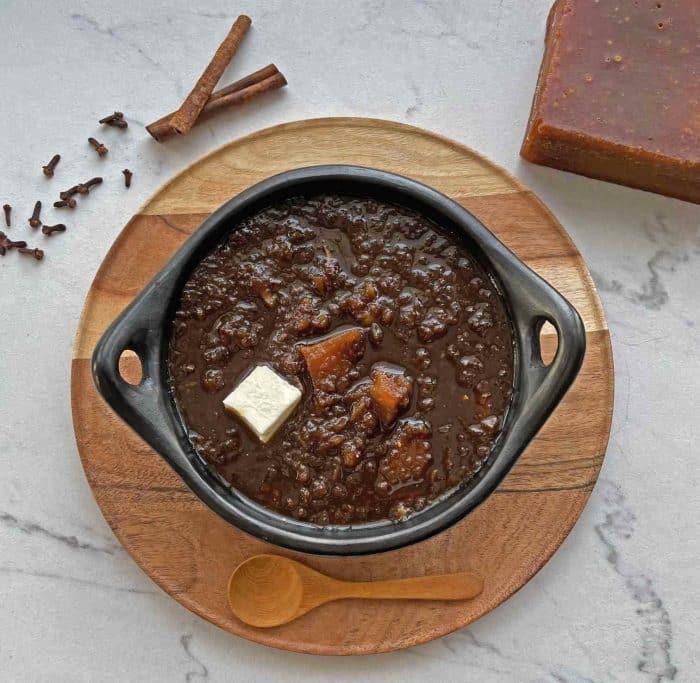 One spoonful of dulce de vitoria—so sweet, so comforting—and writer, poet, BELatina senior deputy editor, and foodie Guisell Gómez is home. Back in Medellín, Colombia, the city she left at age 3 when her family emigrated to Miami.

Even though she’s lived in the States for more than 20 years, “my heart of hearts is Colombian,” Guisell said at a writing conference in 2018. She spoke movingly about a life in exile and described the disorientation of being ripped away so young, so raw from all that represented home: cousins, comfort, belonging.

Is there a Colombian dish that helps her narrow that divide—and cook her way home?

Part dessert, part after-school and weekend snack, this traditional Colombian postre is made by boiling a Colombian squash called vitoria with unfrefined sugar cane (panela), cinnamon sticks and cloves for about an hour.

Vitoria squash goes by many other names, including cucurbita, fig-leaf and chilacayote. Fun fact: squash is botanically a fruit, even though we mostly cook it like a vegetable. This makes mucho sense when you take a bite of dulce de vitoria. The sabor is all fruta: rich and sugary, with a jam texture.

The squash itself looks like a cross between a spaghetti squash and a mottled watermelon. Inside, the meat is white and fibrous, a bit like breadfruit, with large black seeds.

But here’s the thing. Good luck trying to find vitoria squash in the U.S. Believe me, I tried. On a recent Saturday, I drove across Chicagoland to the three biggest markets in Latino neighborhoods.

”I have never seen it in the supermarkets here,” agrees Guisell.

So I bought every other type of squash in the Mexican and Asian sections and came home to do a boil-and-taste test. After experimenting, the closest in sabor and texture was clear: chayote squash. I peeled, chopped and cooked it with the panela, cinnamon sticks and whole cloves for about an hour.

Dulce de vitoria is everything Guisell promised. It is a rich, tangy bowl of caramelized-fruit pudding. A brown-sugary, darker, denser apple sauce. Something like Peru’s mazamorra morada, but different. Cozy and comforting. And totalmente delicioso.

”You want to make sure that the fruit becomes almost honey-like. It has to be caramel-like in color,” says Guisell. “And be sure to remind people that they have the two options of heating it or not heating it when serving.”

When she still lived in Colombia, Guisell remembers her mother and Tía Udiely preparing this pudding-like postre—just for her. ”Because I was la niña de la casa, they would make this for me when I was younger. They knew I would leave Colombia at one point, so dulce de vitoria is definitely a treat. It’s like: ‘Here you go. We love you.‘“

Craving a little sweetness these days? Guisell hopes you’ll try her Proustian cook-me-home. And if you like it, then please, she begs, try her No. 2 favorite Colombian dessert: dulce de leche cortada. This equally traditional treat is made with milk and panela. The milk must be—stay with us here—spoiled, says Guisell. That’s right. “You want it clumpy. Trust me. You’re going to love it.” (More to come on this second dish. We left a quart of milk out for two days, it went bad, and we made it. Guisell was right. We loved it. The dish is cozy, caramel-like, and delish. Something like arroz con leche, but with a deeper-almond-brown flavor, and sweeter. We will be posting Guisell’s dulce de leche cortada recipe and food story soon!)

Enjoy your dulce de vitoria solo or with a slice of Colombian cheese or the closest next thing, Mexican queso fresco. Guisell also recommends accompanying the treat with a glass of (fresh!) milk, like we do with cookies here in the States.

Is it also traditional to serve this dessert with a glass of aguardiente, the licorice-like alcohol of choice in Colombia?

“Honestly, yes,’ says Guisell. Because: There is no wrong answer when it comes to this dulce. “People in Colombia will just eat it with whatever.”

As long as the dulce de vitoria is panela-sweetened and cooked with love.

Guisell Gómez is a Colombian immigrant based in Miami, Florida. As the senior deputy editor for BELatina News, she writes about politics, culture, and issues affecting underrepresented communities. When she’s not writing, you can find her traveling, reading, or expanding her foodie knowledge.
TAGS: vitoria squash, dessert, snack, Colombia, Colombia dessert, dulce de vitoria
Share