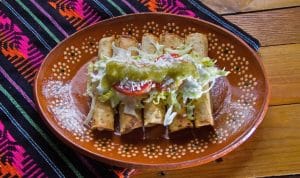 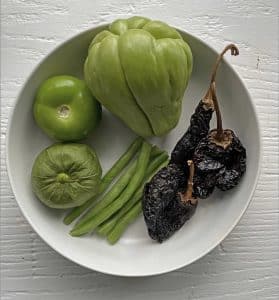 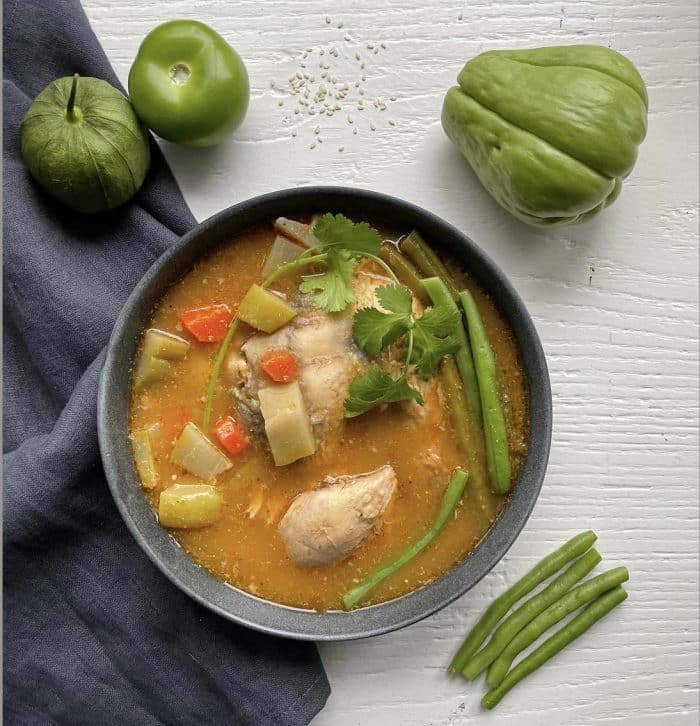 This is the chicken pepian that Maricza Mancilla looks forward to every year for her birthday. Her mother taught her to make their family recipe when Maricza was growing up in Chimatelango. The food from this southern Guatemala area is known as cherepe, she says. What is cherepe comida? Maricza laughs: “Spicy.”

That makes mucho sense. Her homeland’s famed chile guaque is grown in her pueblo and lends earthy heat to many of Guatemala’s traditional dishes. Including this pepian with pollo—her favorite meal, ever.

Maricza now lives in the Boston area—and still makes her mother’s recipe for family birthdays. Serving a bowl of pepian with freshly steamed rice makes the day extra special, she says. For everyone.

Pepián is a combo soup-stew made with comal-charred vegetables, chiles, spices and pepitoria, which are ground seeds from the guisquile squash, also called chayote. The dish’s roots go deep: the Kaqchikel Mayans of central Guatemala made a pre-Hispanic vegetarian version for religious and ceremonial occasions. Six centuries later, the very preparation of pepian is reason enough for Guatemalans to gather. This dish is so loved, pepian was named an “intangible cultural heritage” and national treasure by Guatemala’s Ministry of Culture and Sports in 2007.

This recipe calls for a whole chicken—though you can use pork, beef or turkey, says Maricza. “You can make it with different kinds of meat, but we like the chicken best.”

Does she remember the first time she ever ate pepian? “Ay, Dios mio,” Maricza sighs. “I was little. My mom made it for me starting when I was a very little girl.” Her mother was a really good cook, she says. She made this pepian a couple times a year on special occasions, like birthdays, Christmas Day (but not Christmas Eve: that’s for tamales), and big family gatherings. “When I got married, I asked my cousin to make our family recipe,” says Maricza. “Because my mom was no longer with us.”

Most families in Guatemala have their own way of making pepian, Maricza says. The difference is usually in the seasonings. For example, some recipes use toasted cloves and allspice berries. One of our favorite Guatemalan homecooks Luis Yanes sent us his family pepian recipe, to which he sometimes adds star of anise. ”I would say the differences are based on the sazón that people give the recado, because I have gone to a few restaurants and it is never the same,” says Maricza. That said, she adds, “Practically everybody from my pueblo back in Guatemala makes it the same way.”

Traditional pepian uses two types of chiles—both toasted and seeded. The first is Maricza’s hometown favorite: spicy chile guaque. The second is the smoky-sweet chile pasa, which can be substituted with chile ancho, a staple in Mexican cuisine.

Serve pepian with white rice and a side of warm tortillas. The chicken soup and vegetables can be served with a side of rice—or in it. “I like it all together in a large bowl,” says Maricza. “And a spoon.”

For more Guatemalan family-famous dishes, check out Leny González’s family-famous take on one of their country’s most popular bizcochos, the traditional Guatemalan borracho cake, as well as Guatemalan fruit ponche (often served with rum at her house). And for the December holidays, consider making Luis Yanes’ family-famous Guatemalan tamales—just as family-famous and saved for special occasions as Maricza’s birthday and Christmas Day chicken pepian.