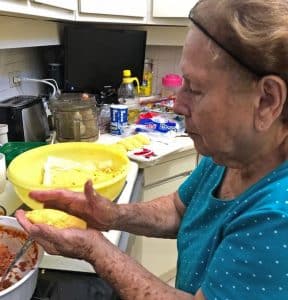 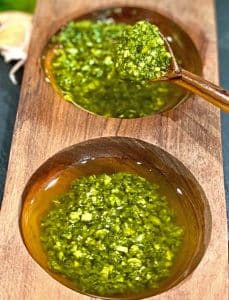 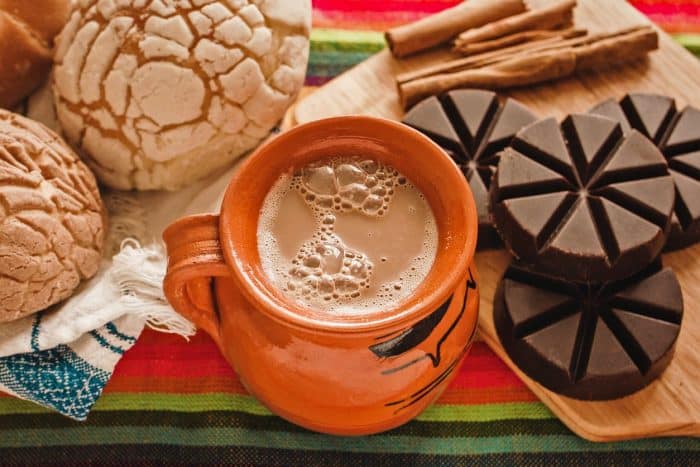 Mexican hot chocolate is a warm abrazo any time of year. Sip it solo mid-day, for dessert, or with a traditional breakfast concha and you’ll feel like you’re in comida heaven, says one of our favorite Mexican cocineras MariCarmen Ortiz Conway.

Served hot or cold, this beverage dates back to the earliest culinary roots of her home country: the Mayans called it “chocolhaa” (meaning: bitter water) and Aztecs called it xocolatl. When los Españoles arrived in Mexico in the 1500s, they were stunned to see how the Aztec and Mayan women roasted, ground and even chewed the sweet-bitter cacao fruit into a variety of drinks—often for religious rituals like the ones honoring the cacao god Ek Chuah.

According to Maricel E. Presilla’s 902-page Gran Cocina Latina tome on Latino food anthropology with recipes, the conquistadores took the cacao back home, and the ingredient became all the rage in Spain and its neighboring nations in Europe. “From the 16th century, it was chocolate that captures the imagination and taste buds of polite European society. And cacao, not yuca or corn, was the first tropical crop of the New World to be valued almost as much as gold by the Europeans,” writes Presilla.

“For many food lovers, this product of the slender evergreen cacao tree (Theobroma cacao) is the New World’s most dazzling gift.”

Chocolate is the Mexican gift that keeps on giving: it has only grown in popularity globally.

How to Make Mexican Hot Chocolate

Familia Kitchen turns to MariCarmen with any question on Mexican food in general and Mexican beverages in particular, since MariCarmen is a certified Tequila Expert,™ a  designation by Cultura y Capacitación del Tequila, A.C. She is also an official Catadora or “taster,” who leads tequila tastings through her company MexicoAcompañado.com.

It may not have alcohol in it, but here is how MariCarmen—who grew up in Mexico City and has long lived in St. Louis, Missouri with her family—makes her Mexican hot chocolate.

She lists the quick steps: “First, I boil the milk. Then I add Mexican chocolate—in tablet form. When it’s all melted together, I put it into the blender to get it nice and frothy because I like a lot of foam in my chocolate caliente.”

No whipped cream, MariCarmen says. The chocolate is already creamy-frothy from the blender. Plus, mixing the chocolate has an extra bonus: “Sometime the chocolate doesn’t melt all the way in the boiling milk, because Mexican chocolate comes in a very hard bar. That’s another reason I put it in the blender.”

Finally, MariCarmen says, “I do a crazy thing with my Mexican hot chocolate: After I heat the milk and melt the tablet, I add 1 more tsp of Abuelita or Nesquik chocolate in powder form, just to give it a tiny bit more sabor. No no one believes me when I tell them I do this: because it’s an aberration—not the typical way to make it. Only I do this. But I think it makes it taste extra flavorful.”

Every once in a rare while, MariCarmen says she is asked to add spicy heat to her hot chocolate, like the Mayas and Aztecs did. “What I do is toast a chile de árbol on all sides, and then I add it to the blender with the other ingredients. It makes the hot chocolate really spicy. I personally don’t love it, but some people really do.”

Honestly, though, MariCarmen adds, you pretty much can’t go wrong with Mexican hot chocolate. “However you serve it, people just love it.”

Like this recipe? Check out more of MariCarmen’s favorite, authentic beverages and recipes for traditional Mexican culinary treasures, like her margarita, paloma, guacamole, Baja-style fish tacos and chocoflan.