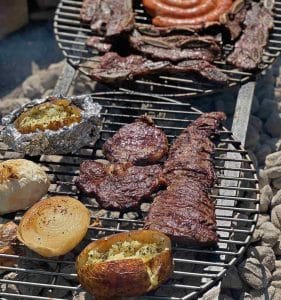 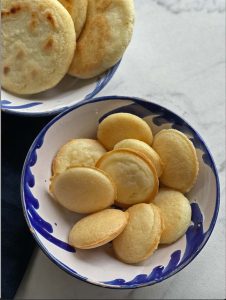 To begin to understand the history of food in Panama, first look at a map. Though skinny and small, Panama plays a gigantic role in connecting the world’s people and cuisines. Every nation on the planet—with its own cooking traditions and ingredient preferences—has passed through its canal. No wonder Panamanian cuisine is so complex and varied.

Panama is the bridge between North and South America and the Pacific and Atlantic. It’s one of the shipping capitals of the planet. This centralized location explains why Panamanian cuisine came to be a delicious mix of indigenous, European, African, Chinese, West Indian and many more global comida legacies.

Like all Latino nations, Panama’s food is rooted in the native ingredients used by its indigenous people before Spanish colonization. Tribes including the Chibchan, Chocoan, and Cueva lived in coastal and non-coastal areas of the land we now know as Panama. They relied on corn, much like their neighbors in Colombia, Nicaragua, Mexico and other countries across Latin America. They were known to hunt and fish, as well as forage and grow vegetables and frutas. These included the yellow cherry-like nanches, cacao, yuca, plantain and camote or sweet potato.

They even made our favorito course: dessert! Thanks to them, we still eat an indigenous postre called pesada de nanche, prepared with sweet nanches, flour, cinnamon, cloves and fruit. Bienmesabe is another time-honored delicacy made with three basic ingredients: harina de trigo or rice, unrefined cane sugar, and milk.

We can’t live on sweets alone, of course, so what did early Panamanians eat the rest of the day? Well, Panamanian tortillas, of course, which are thicker than Mexican tortillas and a staple usually served with queso blanco.

Also loved in Panama: fried yuca treats called carimañolas, as well as empanadas, with beef, cheese and guava, chicken. A Panamanian version of tamales wrapped in banana leaves is filled with beef, chicken, cheese, veggies—or a combination of the four.

Seafood is abundant and essential to Panamanian cuisine. We can taste this in dishes like ceviche and gaucho de mariscos, a rice soup made with mixed seafood, vegetables and garlic.

The Arrival of the Spanish in Panama

In 1501, Rodrigo de Bastidas, a Spaniard from Seville, was the first European to arrive on the coast of Panama. Soon after, Christopher Colombus showed up, on his fourth expedition, and explored the area for four months in 1504. Decades later, in 1591, Pedro Arias de Ávila founded Panama City and established the first European colony in Panama.

Their ships and on following voyages and expeditions carried two tragedies: African enslaved people and diseases like influenza, responsible for the deaths of many indigenous tribe members.

The Spaniards also brought ingredients new to the region like olive oil, pork and spices including oregano, coriander and paprika. They introduced new ways of preserving meats. Chorizo tableño or pork chorizo made with tripe reflects Spanish influence in the way it is seasoned and preserved with paprika and achiote.

In 1821, the Spanish established Gran Colombia that made one nation of Panama, Colombia, Ecuador, Venezuela and parts of Perú and Brazil. Later that century, the countries broke apart into independent countries, and Panama became its own country in 1903. This helps explain why so many of these nations’s cuisine (and maps!) are similar. Think arepas, ceviche, tortillas, and tamales—by different names.

Panamanian-defining dishes reflecting these gastronomical influences include: the national dish of Panama, sancocho de gallina. Also: ropa vieja—shredded beef seasoned with spices not available before Spanish colonization and prepared with garlic, tomatoes, bell peppers, and cilantro—is often eaten with a side of fried-plantain patacones and coconut-flavored rice. Most of these dishes are also signature to the cuisines of Colombia, Ecuador and Venezuela.

Panama’s history reflects the forced relocation of African and Antillean people from West Africa and the West Indies. They often worked as domestic servants and participated in the building and construction process of the Panama Canal, which connects the Atlantic Ocean & Caribbean Sea and the Pacific Ocean, begun in 1881 and finished in 1914.

Also arriving in the 19th century, contracted Chinese labourers came to build the Panama Canal Railway. When their contracts expired, many stayed in Panama and began contributing to the economy by opening shops and restaurants.

We see these groups influence on Panamanian plates today. Afro-Antillean inspired dishes include fried cod fritters, coconut rice and plantains. Coconut is an essential item to various dishes, both fresh and in milk form. Caribbean flavors and the use of fresh fruits and vegetables are evident in dishes like ceviche and foods with fish and seafood.

The popularity of dim sum speaks to Chinese food’s enduring influence on the local cuisine. Panamanians seek out dimsum on weekends and frequent Chinese restaurants and buffets. Shumai dumplings are also popular. They are typically stuffed with pork or shrimp and eaten with soy sauce and other Chinese sauces and sides.

Panamanians like to say their nation is el “puente del mundo, corazón del universo.” Panama is “the bridge of the world, the heart of the universe.” That’s the story of its food, too. Panamanian food is the gateway to a world of culinary influences, techniques and ingredients. Taste it for yourself on the Panamanian plate.

Emilly Olivares and her wife Karen met when they were both Marines. They have since both completed and moved on from military service and purchased their first home in the northwest suburbs of Chicago. ”We are full-time students, dog moms and, most importantly, foodies!” They love to cook (and eat!) dishes reflecting Emilly's Mexican and Karen's Ecuadorian family heritage.
TAGS: corn, shrimp, yuca, national feast, Panama, culinary history, Panama food history
Share