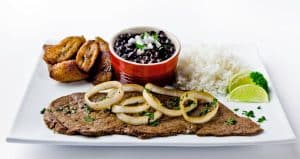 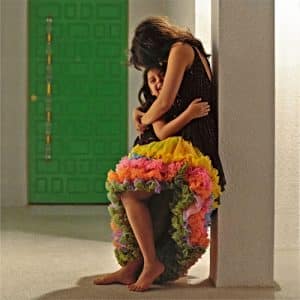 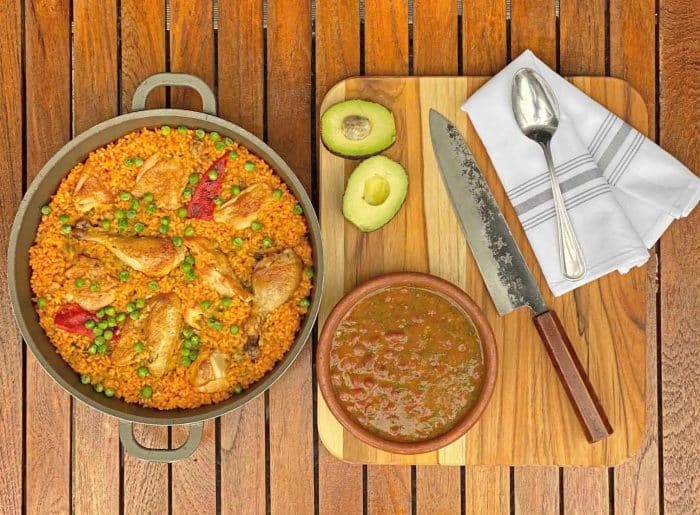 This is the family-famous arroz con pollo that chef Juliana Gonzalez grew up eating in Puerto Rico. It’s the kind of food she celebrates at Caña by Juliana at the Fairmont El San Juan Hotel in Isla Verde, Puerto Rico. Her restaurant’s menu is an homage to the flavors and ingredients of her island and the Spanish Mediterranean approach she famously brings to all her cooking.

Did her mother’s arroz con pollo produce pegao, that Boricua-beloved bottom layer of caramelized rice? ”Ay, que rico,” says Juliana, savoring the memory. ”You need a little bit of oil and you need a pot for that.” Juliana is referring to the designated caldero in most Puerto Rican kitchens. Cooks are OK with this one pot staying permanently blackened from pegao. This helps ensure they reliably get the delicioso, slightly scorched rice layer in authentic arroz con pollo. You can watch Juliana step-by-step making her mom’s arroz con pollo and stewed red beans here.

Family recipes like this one taught young Juliana to think to differently about food and inspired her dream to—one day—become a chef.

And so she did.

From her childhood days in Cabo Rojo, her hometown in western Puerto Rico, Juliana went to cooking school in Miami. She then traveled to Spain to work the line in a two Michelin-starred restaurant. Juliana returned to Florida, where she added Japanese techniques to her cooking chops at top restaurants like Nobu and Sushi Samba Dromo.

This signature trio of influences—Puerto Rican, Spanish, Japanese—can be tasted in her cooking today. Her Barceloneta in South Beach centers around Spanish Mediterranean tapas and family-style platillos. At Fairmont El San Juan Hotel, Juliana goes deep into her Boricua food roots. The invitation to launch Caña by Juliana—caña means sugar cane, the Caribbean island’s once defining crop—was a full-circle sueño come true for this Puerto Rican chef. A sampling of her dishes illuminates her fresh approach to island classics: mofongo with smoked crispy pork and pickled onions, yautía fritters with cilantro and jalapeño aioli, hummus de gandules, and bread pudding made with Barrilito rum. ”I used who I am as a background. I’m Puerto Rican and then I trained in Spain, and I mixed it up with some Japanese ingredients, which I think match perfectly with our cuisine,” she says.

Making Arroz con Pollo for Herself

These days, Juliana doesn’t make her mom’s arroz con pollo for herself too often—”I’m so busy!”—but when she craves Boricua homecooking, this is the recipe she turns to. ”I try to make it as traditional as possible, but sometimes to give the umami flavor, I use capers and anchovies,” she says. ”You mix it up in the sofrito and nobody can tell. The capers and anchovies make you want more and more.”

Yes, it does, and yes we do. The next time we’re in Puerto Rico, we plan to beeline to Caña by Juliana, her homage to the defining dishes of isla cuisine. To taste for ourselves how this arroz-con-pollo-loving Boricua is cooking her way home.