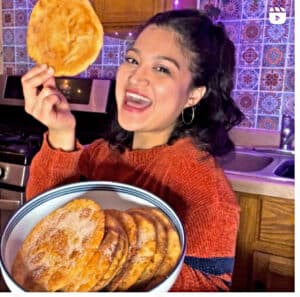 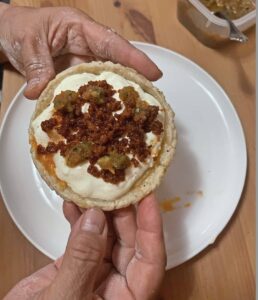 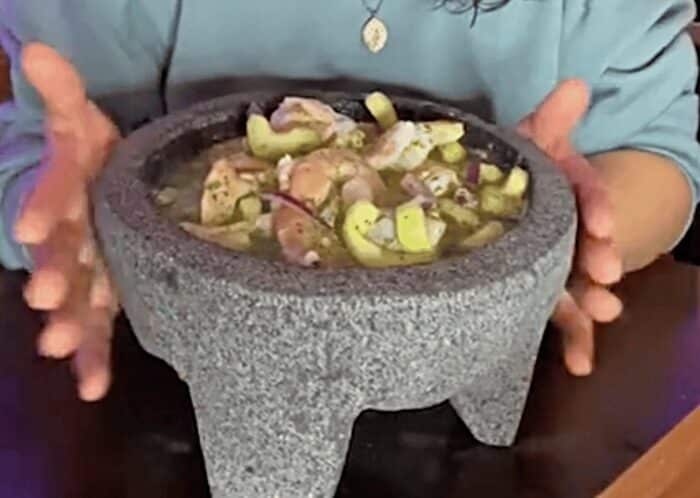 Aguachiles is kind of like ceviche but “it has a lot more flavor, I feel, from the tomatillo, cucumber, cilantro and chile,” explains Vivi Vianey in her latest episode of her traditional Mexican food cook-a-long Instagram Live series, “Feeding the Soul.” As we love to do on Thursdays at 7pm CST, Familia Kitchen tuned in to to watch Vivi show her viewers how she makes this simple and light aguachiles recipe.

First things first: Vivi tells us she loves aguachiles. It all started when she first tasted this dish a few years ago in California. It was so good she craves it even now. When she got back home, she set out to perfect an aguachiles recipe of her own. Since it’s an easy dish to prep for either a weeknight basic or a fancy fiesta, Vivi knew she had to share it with her Instagram audience. ”This is why I do these videos, I want you all to see how simple these recipes are to make at home.”

Vivi has always loved cooking for her large Mexican family in Chicago’s Little Village neighborhood. Vivi tells us her love of food is especially inspired by her abuela, Elisa Abeja. During the early days of Covid lockdown, Vivi took take care of her full time. Cooking with her grandmother, who is a master of traditional Mexican recipes, inspired Vivi to start making and selling traditional Mexican dishes in Little Village. She set up a table on the street with her homemade Michoacan-style tamales: corundas and uchepes, as well as cafe de olla: coffee made in an earthen pot.

”My favorite part was when I opened the olla and people would say ’This smells like my childhood,’” Vivi says. One afternoon her tío drove by and happened to see her. Of course, her uncle alerted the whole family to what she was up to, and the days when Vivi set up her food stall turned into impromptu family reunions.

Today, Vivi is a chef working at Chicago’s Bavette’s Steakhouse and Bar, but she still loves sharing her passion and knowledge of food with her community on Vivis_Table. “I’m on a mission to keep my abuela’s recipes going. Sharing food with people makes my heart full.” With our shared love of abuela cooking and belief in the enduring power of family and food traditions to remind us who we are and where we come from, Familia Kitchen is honored to partner with Vivis_Table and showcase her weekly “Feeding the Soul” Live recipe cook-a-longs.

Never tried aguachiles? Aguachiles starts with shrimp marinated in lime juice. The camarones are then mixed with a spicy tomatillo and jalapeño sauce and tossed with a few extra veggies, Vivi says. The lime juice is the key ingredient. Its citric acid is used to break down or denature the proteins of the shrimp, causing them to turn pinkish and “cooked.” Depending on the freshness of the shrimp, acidity of the citrus juice, and time of marination, aguachiles (like ceviche) is typically very safe to eat.

Vivi tells her Live viewers she made sure to devein, clean, slice and marinate her shrimp before the Instagram Live started, so that the shrimp would have ample time to cure in the lime juice. ”I like to do a butterfly cut because it cooks faster and looks prettier,” Vivi tells us. ”It’s a next-level thing you can impress your family with.” Butterflying, she explains, means you use a sharp knife to slice open each shrimp from head to tail on the top side, without cutting all the way through. For step-by-step instructions for how to butterfly-cut your shrimp, check out her Instagram Live.

Vivi also recommends washing the shrimp after you are finished cleaning and deveining, since you don’t want the shrimp to be slippery while you’re working with it. ”When it’s pink, it’s done,” Vivi says. “Even if it’s a greyish purply, it’s still done.”

The next step is super simple, Vivi says. It’s time to make the salsa. She places the cilantro, tomatillo, jalapeño, lemon juice and salt in her blender. Personally, she likes to use lemon juice in her aguachiles, because it adds a bright touch of sweet that balances the lime’s delicioso yet tart tone. She encourages viewers to adjust all ingredients to personal taste, especially with the amount of chile. ”Some jalapeños are spicier than others and will impact how much you want to put in. If your jalapeños are not tasting spicy at all, feel free to add 1 serrano chile instead,” Vivi says. She tastes it. ”Oh my God, that is fire,” Vivi says, approvingly.

Vivi pours the green salsa into her mixing bowl. She gently stirs in the sliced red onions and peeled, sliced cucumbers. It’s ready! She notes that if you want to get fancy when you serve this dish, transfer the aguachiles to a molcajete after it is fully mixed.

She holds up her molcajete. ”Look how beautiful it looks when it’s done!” Vivi says. ”It smells so refreshing with all the lime and lemon juice.” Serve aguachiles with tostadas, either store-bought or tortillas cut in quarters and fried until crispy, or regular tortilla chips, she says. Even though it’s winter and this is traditionally a light summer recipe, she explains she’s been craving these camarones because they are so simple and refreshing. Aguachiles makes for a great starter or light dinner that goes perfectly with a cold michelada, Vivi says. ”I’m going to make a michelada when we’re done to have with this tonight.” Us too.

Stay tuned! Familiakitchen.com will keep bringing you simple, delicioso and easy traditional Mexican recipes from Vivi’s weekly Live cook-a-longs, If you want to join her ”Cooking for the Soul” or ask questions about recipes in real time, check out her Instagram series Vivis_Table most Thursdays at 7pm, CST.