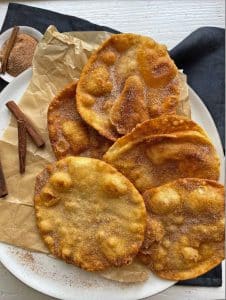 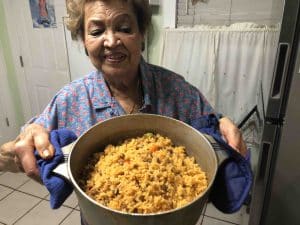 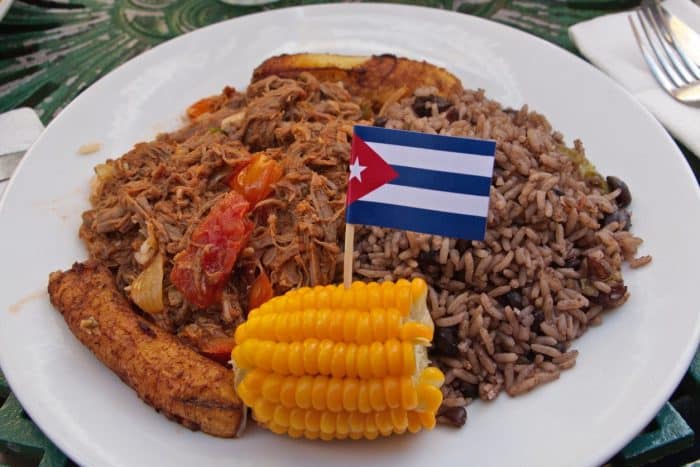 Cuban food is known for its depth of flavor, thanks in part to its culinary holy trinity: garlic, onions and cumin. Rice, beans and yuca are another trio of go-to ingredients that appear over and over in the island nation’s most beloved recipes.

Many of these ingredients star in so many of our favorite classic dishes including: savory picadillo and garlicky yuca con mojo from one of our favorite Cuban-born abuela cocineras, Ana Osadzinski (Colet). Also on our list of must-makes is black bean soup.

In her exploration of Cuban cuisine, The Joy of Eating: Food and Identity in Contemporary Cuba, anthropology prof Christiane Paponnet-Cantat goes deep on what makes Cuban food so unique. Unlike so many of its Latin American and Caribbean neighbors, Cuba does not rely on domesticated chile peppers, she writes, despite these peppers existing for 9,000-plus years in the region. Instead, Cuban cooking stayed connected to its European and Spanish roots in its ingredients and seasonings (see above: garlic, onions, and cumin!).

In particular, the cuisine of southern Spain holds a strong influence on comida Cubana, according to Paponnet-Cantat. That part of España is responsible for the island’s love of meat—seen in many of its traditional dishes like its ropa vieja (lots more on this below) and picadillo.

Spain is also responsible for the widespread use of sofrito, a cooking base made with garlic, onions and other ingredients. Sofrito is the essential starter sauce that gives so many dishes Cuba’s signature criollo sabor.

A Look at the Early History of Cuban Cuisine

Like its Caribbean neighbors Puerto Rico and  Dominican Republic and many Latin American countries, Cuban food brings the culinary influences of its indigenous, African and Asian populations to its Spanish-based cuisine.

The popularity of corn and a variety of starchy root vegetables—like yuca and malanga, often served with garlicky mojo sauce—in Cuban dishes goes back to its indigenous heritage. At the time of European colonization, the local native groups included the Ciboney, Mayari and Taino.

Of course, we can’t talk about Cuban cuisine without talking about its national dish, the delightfully named ropa vieja.

The dish has many recipe variations, but the five main ingredients all tend to have in common are: shredded beef, onions, peppers, garlic and tomatoes. In The Cuban Table: A Celebration of Food, Flavors, and History, Ana Sofía Pelaez shares a legend about the origin of this famed dish’s funny name: “old clothes.” In the tale she recounts, which dates back to the Spanish-owned Canary Islands, a poor man cooked old clothes for his family since he couldn’t afford food. Luckily, his love for his family turned the clothes into a hearty stew—now known as ropa vieja!

In  her academic investigation into the history of this cuisine, The Olla, University of California Press’ Alicia Ríos notes that another traditional dish with a Spanish history and a funny name, olla podrida—its name literally means “rotten pot”— similarly offers rich stew, tender meat, and flavorful vegetables. The slow-cooked carne prepared in the traditional clay olla is then often used for ropa vieja. According to Ríos, the olla podrida dish stems from the ancient Jewish stew adafina, and may have been brought to Spain by Sephardic Jews. Because it was slow-cooked, adafina could be prepared on Friday night and eaten on Shabbat–a weekly observance where all work, including cooking, is prohibited. Today, both olla podrida and ropa vieja are still loved across Spain, though the dishes’ regional variations are known by many different names.

Other Spanish-speaking destinations that claim ropa vieja as part of its local cuisine include the Canary Islands, Colombia and Venezuela, and more!

The rearing of livestock in Cuba began with European colonization. However, the history of beef in Spanish is complicated and gets caught up in the island’s politics. Until 2021, it was illegal for Cubans to slaughter cattle and sell meat. Restrictions on carne began in the early ’60s, due to shortages, U.S. sanctions, and other factors. Other than a few exceptions, the vast majority of beef on the island was reserved for tourists, according to Paponnet-Cantat.

What a tragedy for an island known for its delicious meat recipes and traditional dishes.

Each recipe for ropa vieja is unique to its family and local approach. If you’re ready to try your hand at making this hearty beef dish perfect for Sunday family dinners, check out our Familia Kitchen Recipe Contest winner Ana Osadzinski (Colet)’ s delicious Ropa Vieja with Muchos Spices and Red Wine. We also love ​​Cuban home cook Estrella Cruz-Curoe’s take on ropa vieja! And one of our favorite Puerto Rican food cocineras and her Boricua husband Michelle Ezratty Murphy and Pat Murphy, weigh in with her recipe, which they created by studying 30 different recipes to make their own perfect ropa vieja.