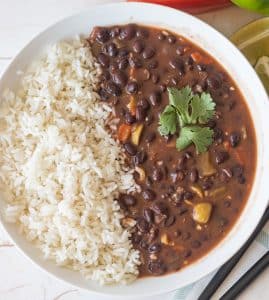 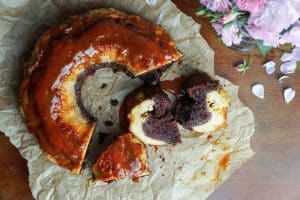 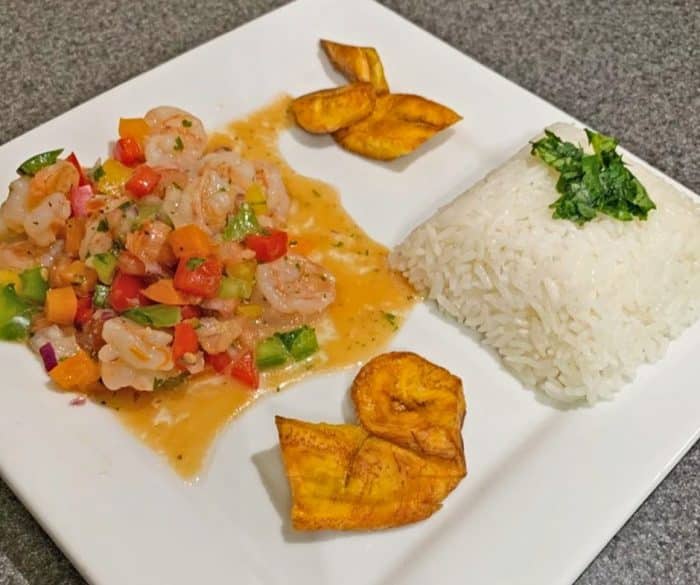 This shrimp ceviche is perfect for those hot summer days when our bellies crave something light and fresh. However, in the coastal region of Ecuador, where my wife Karen’s family lives, ceviche is enjoyed all year round and traditionally eaten on weekends for breakfast or brunch.

Although we now live just outside of Chicago, my wife Karen was born in Guayaquil, Ecuador and raised in New York City by her Ecuadorian mother Magda and abuela Olga. Her fondest memory associated with this shrimp ceviche oe ceviche de camarón goes back to the late 90s/early 2000s when she would visit her familia in Guayaquil. On Sunday mornings, her cousin Michael would run out to la plaza where he’d buy fresh camarones and produce for mamá Olga.

Soon after, grandma would busy herself in the kitchen preparing everyone’s ceviche favorito, while Karen and her familia gathered in the family room. They knew better than to enter grandma’s live cocina, so they sat around enjoying each other’s company as the delicious aromas teased their taste buds.

Karen is happy to share this special recipe for shrimp ceviche that she learned from her mamá, who learned it from her sister, who was taught by their mother!

Ecuador’s Regional Influences on Its Ceviche

This shrimp recipe reflects la gastronomía of one of Ecuador’s four main regions: La Costa in western Ecuador. (The other three are La Sierra, Galapagos and the Amazon.) La Costa is known for its bounty of fresh seafood from the Pacific. Mamá Olga adds hominy to her ceviche, in keeping with the traditions of La Sierra region, but Karen prefers this receta without the maíz, which she also learned from Mamá Olga.

This dish is probably different than other ceviches you’ve had because it starts with cooking a savory broth. The raw shrimp shells are simmered in water with garlic, a pinch of shrimp bouillon, sugar, ketchup and mustard. Karen’s mom explains that boiling the shells “mantiene el sabor del camarón,” helping the dish retain the freshness and flavor of the shrimp. The resulting broth’s combo of sweetness and acidity from the limes beautifully bathes the cooked shrimp and chopped veggies.

This recipe is unique to Karen’s family and reflects her personal experience as a first generation Ecuadorian-American. It honors her abuela’s cooking and their family heritage. Karen and I hope you enjoy the process and outcome of this delicioso ceviche de camarón!