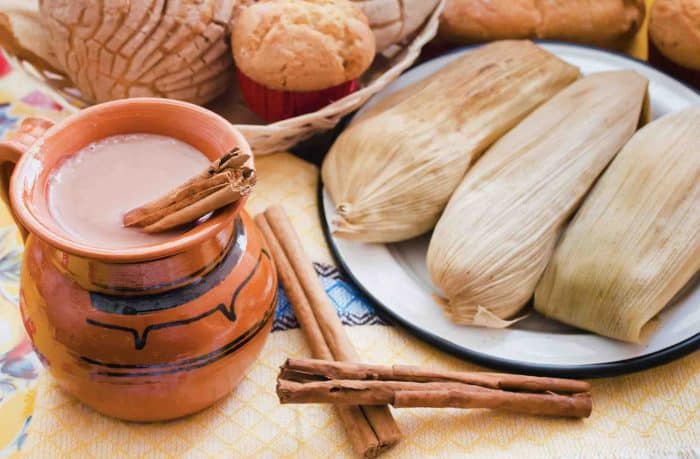 Q: I got the baby in my Three Kings Day rosca. Now what—and why do we eat tamales every year on February 2? What is Candelaria, anyway?

January 6 has come and gone. Los Tres Reyes paid their visit, everyone had their piece of rosca de reyes—and lucky you: You got the baby Jesus in your slice of the sweet bread treat.

You know what that means, right?

You’re on the hook to make a big batch of tamales when everyone comes over February 2—if you’re one of the many Mexican families who get together every year to feast on tamales, hot chocolate, atole (my favorite!), and maybe a caballito or two of good tequila.

But have you ever wondered why this is the day families come together again so close to the holidays—and why tamales, hot chocolate and atole are on the menu?

Candelaria: A Day of Light & Tradition Every February

February 2 is Día de la Candelaria or Candlemas. And it’s the followup to the annual Epiphany festivities of Reyes every January 6. While we’re looking for groundhogs in the States, the day is celebrated pretty differently across Latino countries and cultures. In this Familia Kitchen food and feasting report, we’ll focus on how Mexico does La Candelaria.

Grounded in Mexico’s Catholic heritage, Dia de la Candelaria celebrates the day young Jesus was presented by his parents at the temple of Jerusalem and when the Virgin Mary was purified. According to Jewish tradition of the day, a woman was considered “unclean” for 40 days after giving birth. For that reason, since Jesus was born on December 25, Mary and Joseph would wait until February 2 to present their baby at the temple.

Luke 2:22-39 tells the story: A devout man named Simeon was at the temple that day. When he saw Jesus, he prophesied the child would one day be “a light of revelation to the Gentiles.” Those words sparked a centuries-long custom of bringing candles to church to be blessed every February 2 and helped give La Candelaria or Candlemas its name.

Two thousand years later, depending on the region, this feast day honoring the holy family’s mother and child is observed in a variety of traditions across Mexico. One common element at most Candelarias: a statue of the baby Jesus is dressed festively and carried to church for viewing and blessings. Some communities go all out and organize a street festival to parade decorated statues of Jesus and the Virgin Mary to the local church. Earlier in the year, “godparents” are chosen for baby Jesus and they have the honor of hosting several celebrations leading up to February 2.

An Aztec & Spanish Mashup Celebration With Food and Drink

The ritual of celebrating with tamales, chocolate and atole with friends and family is a blending of Mexico’s centuries-old history and traditions. While the day itself is connected to Catholicism—brought by the Spaniards—the custom of how we feast goes way goes back to the Aztecs. The word tamale comes from the Nahuatl tamalli, which means “wrapped food.” As in what the Aztecs offered the gods each year on Feb. 2, the start of the Mexican New Year: wrapped food made with maize. And of course, chocolate beans and the corn in atole are both crops used and honored by the Aztecs.

Let’s start with the tamales—since they are the main meal in the traditional Candelaria celebration feast.

You Got the Baby Jesus! Which of These Tamales Will You Make?

Here are two of Familia Kitchen’s most popular recipes for these masa delicacies. Choose the one that speaks most to you for your Candelaria gathering.

Our first Mexican tamales recipe are the red pork tamales served by none other than Mexican painter Frida Kahlo in her home, La Casa Azul. (Which means her esposo, the muralist Diego Rivera, loved them, too!) They are classic, spicy and filling.

Our second Mexican tamales recipe is close to my heart: these red pork and ancho chiles tamales were made by my beloved grandmother, Nanni, every year, for our Noche Buena family celebration. Nanni made them with so much love you can taste it on the plate. Her tamales are one my favorite foods on the entire planet. Try them and you’ll see why.

To go deeper into this fascinating food’s ancient roots and evolving ingredients and cooking techniques from country to country, check out our deep dive into the history of tamales across Latino cultures.

Another delicacy associated with Candelaria is champurrado, a drink whose main ingredient, chocolate, comes from the cacao bean. Calling it xocolatl, the Aztecs used chocolate in rituals and thought its beans a gift from the gods. They made a beverage precursor to both today’s champurrado and hot chocolate by grinding cocoa beans and adding chiles and hot water. To make a delicious, modern version, check out this easy Mexican hot chocolate recipe from one of our favorite Mexican home cooks, MariCarmen Ortiz Conway.

My Family Recipe for Atole—Check It Out Below!

My favorite Candelaria traditional drink is atole, which stars another ingredient revered by the Aztecs: corn. This Candelaria, my boyfriend and I plan to make his mother’s family-famous recipe—again. She serves her atole nice and hot—cozy thick with corn and ground nuts. Chicago winters mean mucho snow, and his mom’s atole is just what we crave every February. Try it! Check out her recipe, below.

As you prep your choice of tamales, hot chocolate and/or atole this year, take the time to enjoy the ancient ritual you are participating in. Remember: You’re helping keep alive a part of Mexican history. The feast of Dia de la Candelaria’s elements remain as essential today as they were hundreds of years ago for the Aztecs and early Mexicans: family, food, ritual, home.

How to Make Atole for Your Candelaria Feb. 2 Feast!

Angela L. Pagán is director of social for Familia Kitchen. A Chicago native with Mexican and Puerto Rican roots, Angela has always had a love of food. Though she considers herself a better baker than a cook, she loves a good cooking-competition show. As a third generation Latinx-American, Angela tries to stay connected to her cultura through research, writing—and food.
TAGS: big groups, national feast, Mexico, tamales atole
Share