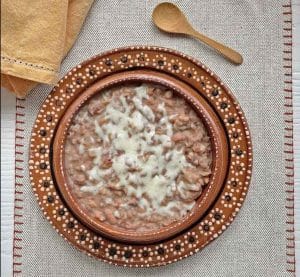 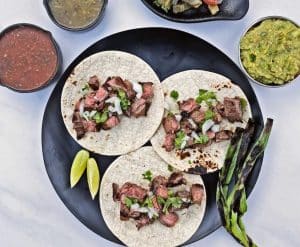 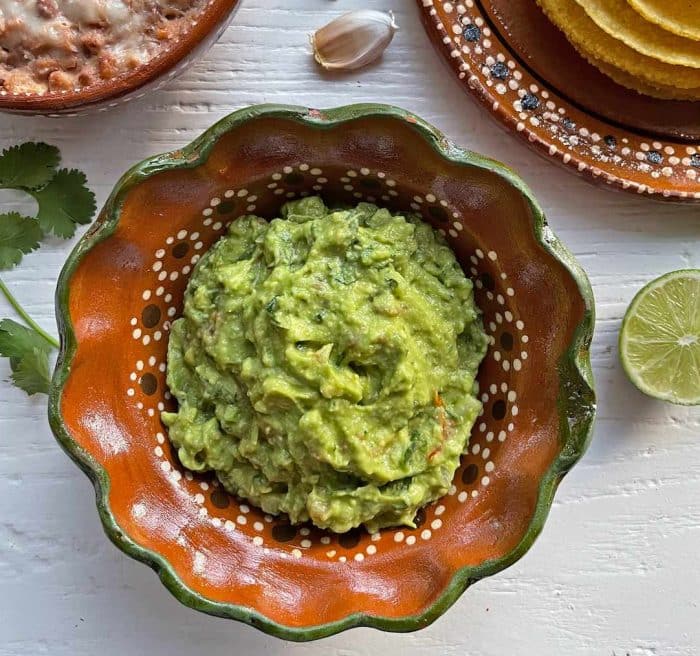 This is el famoso guacamole that one of our favorite Mexican-food cocineras Anjie Villalobos brings to every get-together and makes for family (and herself: she is its biggest fan, she says) once a week—at least.

Anjie has loved guacamole her whole life, she says. ”My mom is the one who first introduced me to making it. She would just basically take an avocado, mash it up and throw some salsa in there. She’d add a little cilantro, some onion and garlic.” Done. Guacamole is also one of the earliest foods recorded by the conquistadores when they sailed into 1600s Mexico. The Spaniards wrote about the local Aztecs mashing a green fruit called āhuacatl into a creamy mixture named: āhuacamolli. 🥑

Ever the recipe tinkerer, Anjie experimented with the dish’s shortlist of ingredients—avocado, chile, tomato, onion, lime, cilantro—until she arrived at the guac that hit all her favorite flavor profiles. It has since become her family’s official guacamole.

“If you look at guacamole, it’s the same ingredients that you would make a salsa with, minus a few things. The same could be said about a lot dishes in Mexican food: you can make so many things with the same four or five ingredients,” says Anjie.

“So, mine isn’t made with anything unusual, but it is my favorite all-time version. It was just finding a balance of flavors that I really enjoy. Making sure there’s lots of lime. Making sure that when I am cutting up the serranos, I cut them up really really fine so that you are still getting a little bite of chile but it’s not adding too much to the texture. Because I think a lot of the texture can be found in the chopped tomatoes and the onions and cilantro.”

How did she know she had arrived at the winning final guacamole version? It’s all about the lime-salt-serrano chile proportions, she says. This recipe is ”very lime heavy”—a good thing, she assures—and “making sure the salt balance is right and that there’s enough chile in there to have a little bite, but not to be overpowering.” Guacamole success.

A Hate-Love Relationship With Cumin

One ingredient Anjie was surprised to find herself using, even if it’s just a smidge, is cumin. “I’m not a big fan of cumin if it’s predominant. But what I found through time is that it’s an important spice in Mexican cooking. And that is if you add just enough, not too much, but just enough, it really adds a nice depth of flavor and smokiness to it.”

After it’s mashed to your favorite consistency (Anjie likes hers medium-creamy, leave a little texture in there, she advises), your guacamole is ready to serve. Anjie recommends taking the extra 10 minutes to whip up a batch of ”handmade tortilla chips that you make yourself by frying tortillas and sprinkling them with salt. I’m a salty,” Anjie says, smiling. “I don’t have a sweet tooth, but I do love salt and put it on everything.”

So do we. So, fry yourself some totopos, gather friends and family, and dig into Anjie’s family-famous guacamole.

To try more of Anjie’s Mexican and southwestern U.S. family recipes, check out her green chile chicken pozole, avocado and serrano salsa, Mexican frijoles de olla or refried beans, and handmade corn tortillas, which she makes when she finds herself far from a good Mexican market. Which isn’t often these days, now that she’s living back in southern California.

Last question: What is her favorite thing to do with leftover guac? “On, no, there’s never any leftovers when it comes to guacamole,” laughs Anjie. “The guacamole bowl always ends up empty, that very same day.”