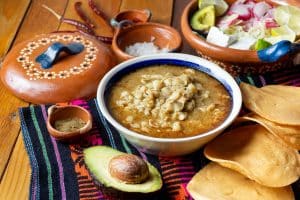 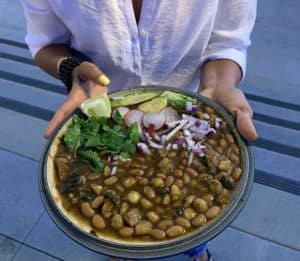 This green chile chicken pozole is a traditional treat that Anjie Villalobos, one of our favorite Familia Kitchen homecooks, makes on the regular with her granddaughter Charlee. ”She and I are kindred spirits in so many ways—most especially in the kitchen! Char loves cooking and is always enthusiastic to participate and very curious about all things culinary. (I have learned that if you stick just about anything into a tortilla, give her some hot sauce and call it a taco, nine times out of 10 she will eat it and love it! 😅)

Anjie reports that she also learned to make pozole at a young age. ”I grew up watching my mom and my grandma make it. For the most part they would make the traditional red pozole with pork, mostly around the holidays and whenever we would have big family gatherings. Over these past years, Mom started experimenting with green chicken pozole and it quickly became a family favorite. No doubt there are many different methods and variations for making it, but I find this easy and reliably delicious!”

”I make pozole at least once a month. Sometimes I make green and sometimes I make red, just depending on what I am in the mood for. It’s an easy and healthy dish so I often make a big pot. As with most soups and stews, I find it tastes even better the next day!”

”We are a family who thinks of recipes as more of a guideline than something to be strictly followed. We are not ones to measure or write things down. For this one, I just took the basic ingredients my mom uses and then made it my own. I’ve got to tell you, coming up with the measurements and sharing the steps for cooking methods was the hardest part of this! I am usually one to feel my way through without really thinking. 🙃 That is probably the way I approach most of life … although that has gotten me into big trouble in certain areas of life, it seems to work for me in the kitchen!”

”I’ve had so many great pozoles, but if pressed (and maybe I’m being nostalgic), I would say my grandmother’s pozole was the best I have ever had. She put so much love into all that she cooked, and her love could be tasted in everything.”

Just talked to Anjie and she says: you are 100% right. The recipe accidentally lists the salt twice. Were going to fix...

Hi Jana, that does sound like a whole lot of salt. We'll check with Anjie and get right back to you!

I am making your Green Chili Chicken Pozole today. My question is regarding the salt that is called for in the recipe...