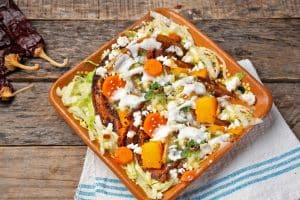 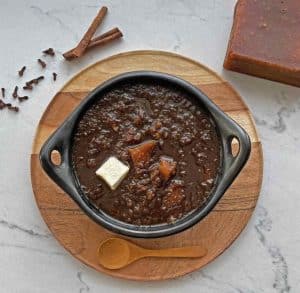 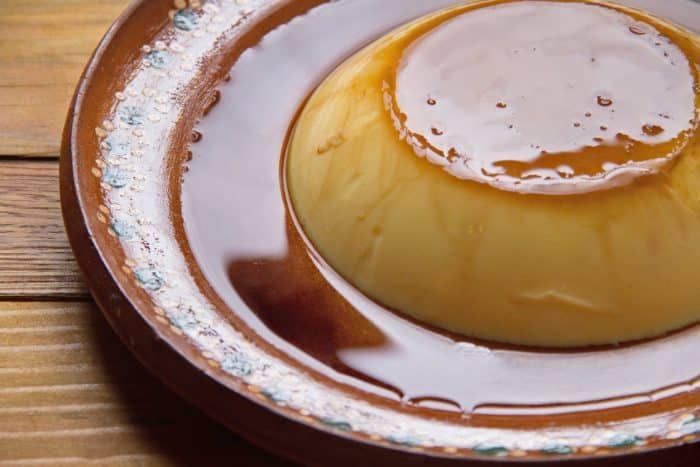 The history of flan—Familia Kitchen’s official nomination for No. 1 dessert in our community of cooks’ 20 Spanish-speaking homelands—begins in ancient Rome.

From there, the caramel-crowned custard traveled far, including aboard Spanish galleons to the New World. The creamy postre went on to establish itself as one of the most loved on Latin America and the Caribbean dinner tables. Six centuries after the conquistadores arrived, flan is still the most likely to be served sweet at the end of a festive meal. (Think of the last time you went to a Latino restaurant. What was the first—and maybe the only—dessert listed on the menu?)

It’s no surprise, then, that flan recipes come in hundreds (maybe thousands?) of variations in ingredients, preparations, and baking techniques.

Prized for its texture and rich sabor, flan is traditionally served year round (so cool in the summer, so comforting in the winter). The postre is also relatively easy to mix and bake, making it a reliable finale for every type of gathering. No matter your flavor preferences, you’ll surely find a flan to love. Love citrus? So many recipes include lemon, lime or orange zest. Cheese fan? Try Dominican quesillo. Prefer things savory? See the three pumpkin flans below. Like yours spiked? Try Puerto Rican or Dominican flan, which often call for a shot of good rum or a liqueur like Curaçao (btw, with rum and liqueur is our favorite way here at Familia Kitchen). And if you choose to keep things classic: going for flan at its most basic—just milk, eggs and sugar—is incredibly delicioso.

Reliable, scrumptious, festive. No wonder flan is the go-to dessert for so many Latino home cooks.

Though chickens were originally domesticated thousands of years ago in southeast Asia, it was the Romans who first thought to cook eggs with milk and make custard. Rome fell, but the dish endured, and custard recipes spread throughout Europe, especially France and Spain. Their early versions were often baked in pastry shells (think of today’s quiches or custard tarts). The dessert’s name comes from the old French flaon, derived from the Latin word for flat cake: flado.

At first, flan was savory. Then, things turned sweet, as honey found its way into the custard. Finally: sugar. According to the Encyclopedia of Jewish Food by Gil Marks, the practice of cooking eggs, cream and sugar in an earthenware dish most likely began in medieval Spain. Cooks during the Moorish Empire were the first to coat custard in the caramelized sugar that has become a signature of modern-day flan.

One of the reasons flan became so popular in Spain, according to food historian Marilyn Tausend’s La Cocina Mexicana: Many Cultures, One Cuisine, is that egg whites were used to varnish Spanish church murals and gilded altars. To deal with the surplus, Spanish nuns baked the leftover yolks (imagine how many thousands there were!) into creamy flans and other egg-based desserts. Flan lovers, thank a nun.

How Flans Are Made

The classic way to make flan is to use a flanera, a double boiler that gently cooks the egg-y custard in a custom pan designed to sit inside a second one filled with hot water. This process is known as baño de María—the Spanish translation of the medieval French cooking technique bain-Marie. More simply, it’s also called a water bath.

Flans used to be made by stirring and cooking milk or cream. Thanks to Nicolas Appert in Italy and Gail Borden Jr. in the United States, who both sought to process and can milk to avoid bacteria and extend shelf life, we have condensed and evaporated milk. Sweetened condensed milk, used by most flan recipes today, is milk that has about 60% of its water removed—and sugar added.

If you’re short on time, try making flan with condensed milk and a pressure cooker! By reducing cooking time, the chances of the caramel burning and the flan becoming rough or too dense decrease, according to Ralph Early’s Technology of Dairy Products.

No matter your favorite ingredients or techniques, you’re sure to find a favorite in this roundup of our seven most downloaded flan recipes sent in by our Familia Kitchen community. These recipes are from all over Latin America. We start with four classic versions—from Colombia, two from Mexico, and Puerto Rico. From there, we showcase the flan mixto from Argentina topped with both dulce de leche and whipped cream, and a Dominican flancocho, the trendy half-flan, half-chocolate cake showing up all over our social feeds lately. We wrap things up with several versions of pumpkin flan, one from Puerto Rico, one Dominican, and one Healthy & Delicioso flan flip, which subs in non-dairy alternatives.

All seven are favorite recipes in their households and guaranteed delicioso. Plus, we made them all in our test kitchen’s Familia Kitchen flan-athon and can personally vouch all are flantástico and worthy of their family-famous status.

Check out all seven’s differences and similarities!

Janeth Palacios Barrera’s mother makes this family-famous flan for every special occasion. When she eats it now, Janeth is warmly reminded of her childhood in Medellín, Colombia. “It is filled with love and sweetness,” Janeth says, “like everything about her.” This flan is simple, reliably delicioso, and adapts easily to individual-size servings, Janeth adds.

If you want to try making Mexican flan the old-fashioned way, try this fresh-milk receta served by the legendary artist Frida Kahlo herself! On the day she married Mexican muralist Diego Rivera, August 26, 1929, this flan was on the menu, reports the cookbook Frida’s Fiestas: Recipes and Reminiscences of Life with Frida Kahlo, by Guadalupe Riverand Marie-Pierre Colle. The fact that a special wedding cake had been ordered from the best bakery in Coyoacán didn’t matter: this classic custard no podía faltar to ensure the feast offered the most authentic and traditional Mexican fare.

This flan recipe reminds one of our favorite home cooks Lisa Kear, who now lives in Knoxville, Tennessee, of growing up in Panama. According to Lisa, the flan’s egg–milk–sugar ratio is what gives it its perfect semi-firm texture. This recipe uses both fresh milk and condensed milk. Covering this flancito with foil while it’s baking ensures it will firm up to the right consistency. Lisa recommends letting the flan cool for at least 30 minutes before serving (or even leaving it in the fridge overnight) so that it’ll easily slide from the mold.

Marisa Jiménez Caviness served this custardy-plump flan at least every other time people came over. Since she and her husband owned a little hotel in Condado, Puerto Rico—and frequently invited the regulars over for drinks, dinner, and dessert—there were many opportunities for this flan to be enjoyed! Marisa’s secret ingredient is using 2 jiggers of fruit-flavored liqueur, preferably Curaçao or Grand Marnier. You’ll know the flan is ready when you insert a knife or a toothpick into the center and it emerges clean, she says.

This very special family recipe for flan mixto with dulce de leche is a favorite in la casa of one of our favorite Argentinian home cooks, Melina Adduci. The recipe was sent to us by her mom Alicia, and we are forever grateful. It’s double delicious because this flan is traditionally served with both dulce de leche and whipped cream (called crema batida) on top—hence the mixto in its name.

Flancocho is the choco-creamy dessert of our dessert dreams. It’s half flan, half bizcocho or cake, and 100% delicioso. This recipe comes from Rose Rosario, the president and CEO of Angela’s Bakery in Brooklyn. Angela’s Bakery specializes in making traditional Dominican cakes, famous for using dark cocoa and being light as air. Lucky for us, the bakery ships its chocolate (and vanilla) Dominican cake box mix nationwide.

Naihomy Jerez loves to experiment with ways to make recipes healthier. Or, as she says, flip them. Here, she first shares her mother Rosa’s famous calabaza flan recipe, which Rosa reimagined from her Puerto Rican friend Edith’s traditional Boricua version. Then, to keep things interesting and dairy-free, Naihomy flips her mother’s version. She uses unsweetened cashew milk and unsweetened coconut milk instead of sweetened condensed milk—and maple syrup instead of sugar. The results are just as mouth-watering, Naihomy promises.

Which flan will you make first? Or maybe you try them all!

Whether you’re planning a feast or simply want a quick meal that reminds you of home, we invite you to visit FamiliaKitchen.com to explore our family-famous desserts and Latino recipes! Together, we’re building the most authentic, biggest and best colección of traditional recetas that help us cook our way home, together.