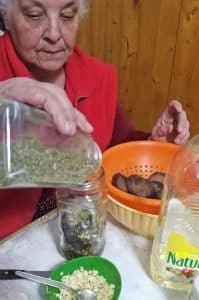 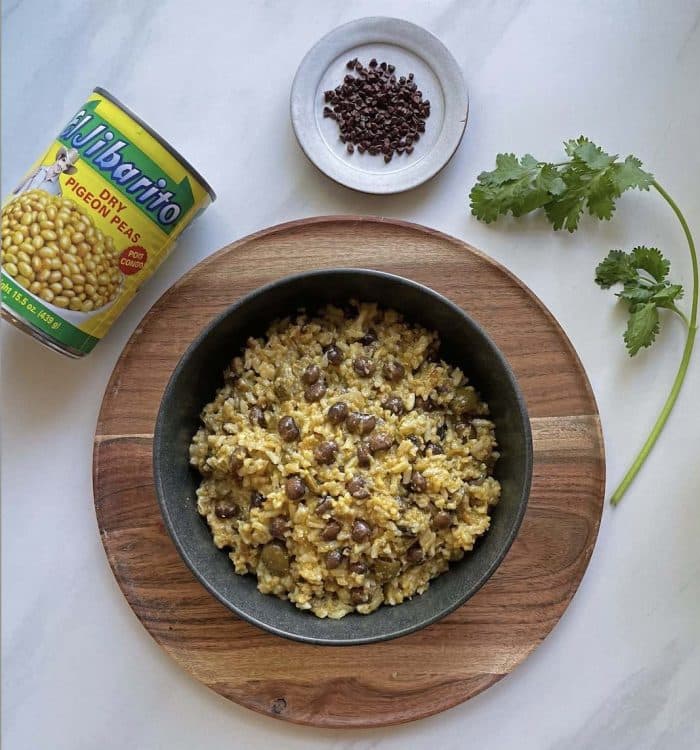 This arroz con gandules family recipe was pressed into the palm of Cynthia Fuentes when she was a newlywed by her husband’s aunt Carmen. “This is one of Steve’s favorite dishes, and you’ve got to learn how to make it,” Cynthia remembers her husband’s tia telling her, welcoming her into the family.

Cynthia had already heard a lot about this beloved Christmas side dish Puerto Ricans make every December on the island and here in the States, she says. “Steve would always talk about when he was growing up that he would go to his aunt’s house on Christmas. And she would always make this arroz con gandules. And sometimes, before Christmas, she’d send a special plate home with him for his dad,” says Cynthia. “But it would never make it to him—because Steve would eat the entire thing.”

The History of Gandules or Pigeon Peas

Arroz con gandules is a festive dish anticipated every December at the Puerto Rican holiday table. Its defining ingredient is gandules or pigeon peas: small, stewed-brown beans that originated in India. This legume journeyed to Africa first and later aboard slave ships to Puerto Rico in the 1600s—along with plantains and yams. This legume is a favorite across the Caribbean and goes by many names, but its most widely known—pigeon peas—is traced to Barbados, where it was (you guessed it) used as pigeon feed.

To make traditional arroz con gandules, simmer gandules in broth or water to cover in a huge caldero or Dutch oven. Then fold the beans into savory, long-grain white rice. Or save yourself the 2 hours and open a can of prepared gandules, like Cynthia and so many Boricua homecooks do. Not an onza of sabor is sacrificed, Cynthia promises. “I like using canned gandules. I think they have a pretty authentic flavor.”

Other tweaks Cynthia has made to the original family recipe over the years include using olive oil instead of lard and occasionally subbing in sausage for ham. “I vary what kind—I often use turkey sausage— depending on who’s eating it because we have some vegetarians in our family and some people who don’t eat red meat. But I keep it pretty authentic otherwise.”

This family recipe goes back to Steve’s roots in the northwest Boricua city of Arecibo. The aunt who taught Cynthia to make this dish, Carmen Rodriguez, moved from the island to the Chicago Puerto Rican neighborhood of Humboldt Park, where she lived for more than 50 years.

Since she married Steve 27 years ago, Cynthia has learned to master Carmen’s recipe. Today, she shares husband’s arroz con gandules devotion. “Oh, I thought it was wonderful,” she recalls of the first time she made this gandules recipe. “I had never had anything quite like it. My mom used to make something that she called Spanish rice when I was growing up, but I’d m sure that it had no authenticity.”

Cynthia didn’t stop at arroz on gandules. She learned to cook many more traditional Puerto Rican classics, like fried-plantain tostones y sofrito, the essential base that provides the flavor foundation of so many Boricua dishes. “My mother in law, oddly, does not cook and never really cooked. So everything I learned about Puerto Rican cooking, I learned from my husband.”

Sadly, Steve’s aunt Carmen passed away about five years ago. To honor her memory, Cynthia continues the family tradition of making a big pot of arroz con gandules every Christmas. “If we have turkey or a roast beef or a ham or something like this, people always ask me to make this as the side dish.” Just like it was gifted to her, Cynthia is honored to pass this family recipe onto the Familia Kitchen community. She hopes it will inspire the next generation of Latino homecooks—including her two sons, 18 and 21, who love this dish. Now it’s their turn to learn the family tradition of making aunt Carmen’s arroz con gandules, just like she did as a newlywed.