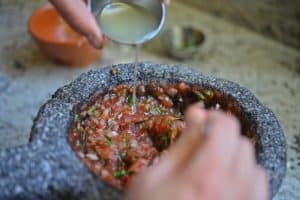 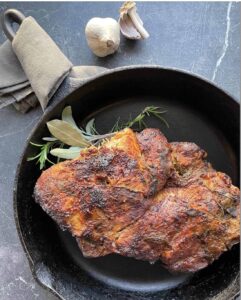 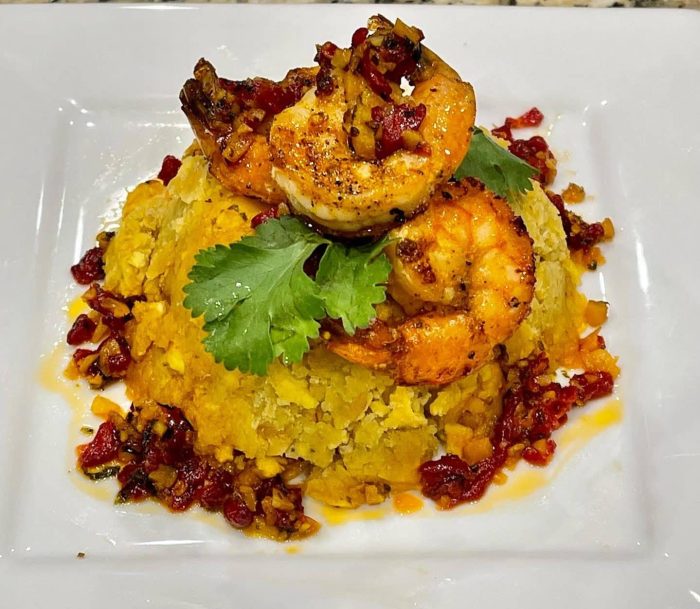 “Mofongo with shrimp is one of my favorite dishes,” homecook bex travesti told Familia Kitchen when she sent us her family-famous recipe for this mashed-plátano dish. “It is often my first meal I seek out when I’m in Puerto Rico. In my opinion, this dish is the greatest representation of Puerto Rican food.”

Though she lives in Iowa today, Bex grew up in Chicago in a Puerto Rican–Polish family. Her dad is the Boricua, born in Humacao, a small city in the southeast of the island. From a young age, Bex loved to spend time in the cocina and learned to cook her way home to both sides of her heritage. Make that three sides: She also mastered recipes honoring her husband’s Mexican roots. To taste her Mexican cocina chops, check out Bex’s shrimp ceviche, a Familia Kitchen Recipe Contest No. 1 winner. (We love her ceviche so much, it’s in our Recetario Cocina Familia.)

Puerto Rico’s traditional dishes have a special hold on her heart, Bex tells us. These recipes remind her of visiting relatives on the island. Starting with this shrimp mofongo. “I’ve had it in restaurants but was never smitten until one family trip to Puerto Rico,” she says. “That’s when I discovered how lovely the dish truly is. The richness of the platanos, kissed with the essence of garlic. I feel it is a great representation of the Puerto Rican culture. A mash-up (pun intended) of what makes us Puerto Ricans. It marries our three cultures: the Taino, the African, and the European, into a simple but beautiful dish.”

Mofongo refers to the plantain mash itself. Green plantains are sliced into chunks, fried and mixed with olive oil, garlic, salt and (usually!) chopped pork rinds into a warm, crunchy mound of garlicky deliciousness. Think a heartier, thicker mashed potatoes, sometimes loaded with a topping, in this case blackened shrimp. What makes this comfort food an island favorite and takes it to a new level of delicioso is when the plantain mash is filled or covered with a protein—usually chicken, beef, seafood or vegetables—after being sautéed in sofrito, Puerto Rico’s essential cooking base. Mofongo is the Boricua descendant of the West African dish fufu, which is made with boiled yuca or yams. Fufu was brought to Puerto Rico by enslaved Africans forced by the Spanish to work on sugar plantations. Over time, Puerto Ricans made the dish their own, replacing the boiled yuca with fried green plantains. African fufu is also the basis of Dominican dishes like mangu with los tres golpes, a traditional DR breakfast.

Bex’s favorite way to eat mofongo is topped with blackened shrimp. “In my recipe, I included chicharron or pork rinds, which is a traditional way to make this dish, but definitely optional if you don’t eat meat. Some purists will also balk at store- bought chicharrón,” she says, “But do what speaks to you.”
When Bex emailed this recipe to us at Familia Kitchen, she signed off “con sabor y sazon”—“with flavor and seasoning”—like the great Boricua cook she is. Gracias, Bex!

To try more of Bex’s family-famous Puerto Rican and Mexican recipes, start with her Recipe Contest-No. 1-winning Ceviche de camarón and then work your way through her guacamole, sopes de carne asada, chili with beef, beans and hominy, and her incredible coquito French toast. If you have a sweet tooth, this last one is for you, dulce fans. And finally, this mofongo with shrimp recipe dish includles one of our favorite words in all of Latino cooking: mofongo!